In August, I had a productive reading month participating in ARC August, a reading challenge that focuses on catching up on Advanced Reader Copies, as well as the week-long Bout of Books readathon. I was able to finish 4 of the 6 ARCs on my list while still leaving some space for mood-reading, and although I didn’t encounter any elusive 5-star reads, I read several books that I really enjoyed.

Luster by Raven Leilani (4 stars) – A somewhat unsettling literary fiction coming-of-age novel focusing on a twenty-something losing her grip on the stability of her job and apartment and whose only apparent option becomes moving in with her married boyfriend, his wife, and their daughter. It explores the uncomfortable dynamics of an open marriage whose participants are clearly not equally happy with the situation, as well as the subtle racism facing the couple’s Black daughter, which our protagonist is clearly able to see but is invisible to her parents. Leilani’s prose is skillful and deft, and her sentences were fascinating to read. Luster came onto my radar after I saw it nominated for a debut fiction prize, and I’m so glad that I picked it up, because I’ll be extremely interested to pick up any future books from this author.

13 Ways of Looking at a Fat Girl by Mona Awad (4 stars) – After reading Mona Awad’s Bunny, my NEW FAVORITE BOOK OF ALL TIME, earlier this year, I immediately bought Awad’s only other published novel in hopes that it would work similarly well for me. And there were definitely parts of 13 Ways that did. I think that Awad taps into the heart of our societal obsession with thinness and how diet culture is pervasive in so many aspects of life; there are so many scenes where the emotions and undercurrents are dead on. But there were other parts that dragged or felt superfluous, and I felt that it might have worked better as a shorter piece, even though it’s only about 200 pages long. So it’s not my new favorite book, but there were definitely aspects that reminded me why I love Mona Awad’s writing so much, and I think it’s a book that so many women can identify with in different ways. I absolutely don’t think it deserves its abysmal Goodreads rating, but I can see how it would be polarizing in the way that Bunny also was.

We Are All the Same in the Dark by Julia Heaberlin (4 stars) – My full review for this twisty, atmospheric, feminist mystery/thriller can be found here.

A Beautifully Foolish Endeavor by Hank Green (4 stars) – The sequel to the extremely fun and social media-focused An Absolutely Remarkable Thing was a little bit darker, more complex, and a very interesting ending to the saga of the mysterious Carls, alien technology that appeared simultaneously all over the world in the first book. I liked that it was told from multiple perspectives, which gave us a broader view on the situation, and I listened to the audiobook which was very engaging and well-narrated. I’d recommend this book to readers who mainly read contemporary fiction but are looking to dip a toe into near-future science fiction, and to social media-savvy readers.

Slay by Brittney Morris (3.5 stars) – An engrossing and addictive contemporary YA novel about a Kiera, a high school student and young game developer who creates Slay, a game that celebrates the Black experience, and whose world shifts when a player is murdered in the real world and she finds herself and her game the targets of blame and racist vitriol. Slay is a book that celebrates creativity and drive in a protagonist who’s balancing school, college applications, a boyfriend, and family with a secret passion no one in her day-to-day life knows about; I think readers of Fangirl and Eliza and Her Monsters will really like it for that reason. It also deals with the different types of racism Kiera experiences and the different ways that she and other characters take to combat this. It’s a book that I felt like I had to keep reading; at one part I got so emotionally invested that I had to peek ahead and spoil the ending for myself. Definitely recommend!

Don’t Hex and Drive by Juliette Cross (3.5 stars) – This is the second book in Cross’s Stay a Spell series, which is set in New Orleans and focuses on a family of witch sisters in charge of the city’s supernatural community. Isadora is a sweet, garden-loving witch who’s uncomfortable around most people outside of her family, and who enjoys gathering herbs and enchanting them for sale at her family’s witchy boutique. Devraj Kumar, a powerful vampire tasked with hunting down vampires who break their community’s laws, accidentally hits her with his car and becomes enchanted with her, although Isadora at first wants nothing to do with him. They’re thrown together further when young women begin disappearing from the New Orleans bar scene and it becomes obvious that vampires are involved, and Isadora and Devraj have to work as a team to take down the culprits.

I really love the supernatural worldbuilding that Juliette Cross develops in this series, from the witches and vampires to the mysterious Grims and artistic werewolves. I also love how she sprinkles in hints of relationships that will be the focus of future books (I cannot WAIT for the book focusing on Jules, the powerful head witch, and Ruben, the boss of the New Orleans vampires, who have great chemistry in every scene they’re in). Cross is also great at writing romantic scenes, and I loved Devraj as a character–he’s very complex, as one would expect from a centuries-old vampire who’s been able to travel the world and live life to the fullest. I connected less with Isadora, who didn’t have as strong of a personality as many of her other sisters, and who seemed much less dimensional than Devraj. Although I do really enjoy this series, as a whole I didn’t enjoy this installment quite as much as I did the first book, Wolf Gone Wild, but I’m definitely looking forward to reading the other books in the future.

I received an eARC from the publisher via NetGalley in exchange for an honest review.

Where Dreams Descend by Janella Angeles (3.5 stars) – I really enjoyed this feminist YA fantasy with Phantom of the Opera and Moulin Rouge vibes. Female magician Kallia performs nightly at a club owned by the enigmatic magician Jack, but dreams of making a name for herself outside of its boundaries. She finds her chance when a mysterious nearby city hosts a competition for magicians, but when its participants begin to go missing and she is forced to confront the misogyny of the world of magicians, she realizes it may be more of a challenge than she bargained for. Kallia’s strength of character and her formidable magical talents are tested throughout the book, and twists abound. It’s definitely an intriguing book, featuring a love triangle and mirrors that hold dark secrets, and I’d definitely recommend it to YA fantasy fans. I received an ARC of Where Dreams Descend from the publisher in exchange for an honest review.

Tools of Engagement by Tessa Bailey (3 stars) – In the third installment of Bailey’s Hot and Hammered series, which is centered around a house flipping company on Long Island, we’re re-introduced to the chemistry between perfectionist house stager Bethany and new-in-town Wes, who’s several years younger than Bethany but was forced to shoulder a lot of responsibility at a young age. Wes, who’s also a former rodeo competitor from the South, is instantly attracted to put-together Bethany, but she remains very skeptical of his motives for most of the book. When they’re thrown together in a house-flipping competition that’s being filmed for reality TV, their chemistry heats up as they begin to develop a mutual respect–Wes coming to see Bethany as a more complex person than the cool, calm, collected exterior she always portrays, and Bethany respecting Wes’s devotion to taking care of his niece after his sister left town.

Although I did think that Bethany and Wes had great chemistry with a lot of banter, I felt that the book overall tended to emphasize rigid traditional gender roles in a way that didn’t feel like it was set in 2020, which made it hard to fully enjoy the book. Although the development of the “Just Us League,” a group of women supporting women developed in the first book, seems on the surface to be a progressive, feminist act, there’s a lot of repetitive binary talk of “girls do this” and “guys do that” that’s never really challenged or explored in a modern sense. It’s something I noticed more and more as the series progressed, and that I wish had been addressed.

I received an eARC of Tools of Engagement from the publisher via NetGalley in exchange for an honest review. 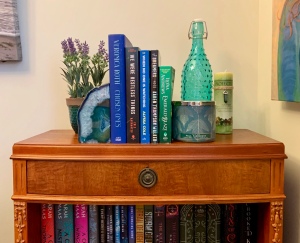 I’m slightly late posting this one, but I’m really liking adding TBR blog posts to help map out my reading for the month, so we’re going to roll with it. In September, I play to do three things: start my fall-themed reading, get to a few fall ARCs, and finish the three books I’m carrying over from August.

We Were Restless Things by Cole Nagamatsu (release date 10/6) – YA mystery/contemporary fantasy about the mystery surrounding a boy who drowned in a lake that only his best friend can find.

Emerald Blaze by Ilona Andrews – second in a trilogy (and also fifth in a series) following magical families in Houston, and focused on the romance between Catalina, the head of her family’s house and the possessor of siren magic, and Alessandro, an assassin with mysterious motives.

Chosen Ones by Veronica Roth – Following the five “Chosen Ones” who defeated the evil Dark One as teenagers, but ten years later when several of them are suffering from PTSD and struggling to figure out how to live their lives in the aftermath.

The Dreamers by Karen Thompson Walker – following a variety of characters after a mysterious sleeping sickness originates in a small college town.

What are you reading in September?