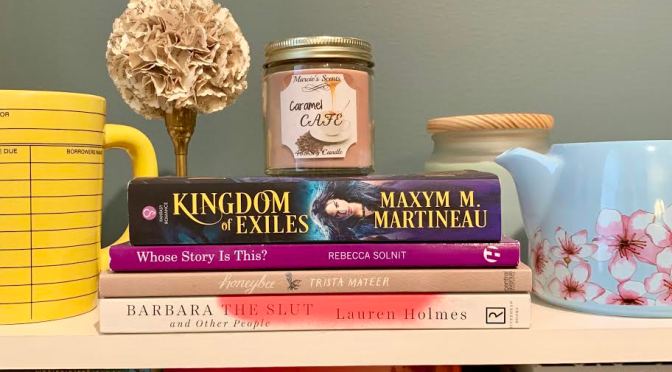 And it’s another belated wrap-up in 2019! June got a lot busier than I expected (BEA/BookCon and a road trip to Philly another weekend both ate into my reading time), but we’re finally here with some reviews and some recapping.

I really, really struggled with reading in June; I felt like I was having a hard time finishing books, and although I didn’t read anything that I necessarily disliked, I also felt like the books I was picking up overall weren’t as enjoyable for me as I’d hoped they would be. I felt like I was putting unnecessary pressure on myself to read a certain number of books before the end of the month, and also that since the end of June marked the halfway point of 2019, that I wanted to have read more 5-star or standout reads than I felt that I had. I found myself feeling more pessimistic about my reading than I normally do, and the books I gravitated towards tended to be shorter reads because of this. Not that that’s necessarily a bad thing; I love a tightly written short book, but in this case it was more about the fact that I simply wasn’t able to finish anything longer.

I’m already doing much better with my reading in July, and hopefully my reading slump seems to have abated some. That being said, here are my June stats and reviews:

Barbara the Slut and Other People by Lauren Holmes (4 stars) – an unexpectedly great short story collection that I picked up on a whim at an outlet bookstore last year. There were some stories in this collection that I absolutely loved and felt were 5-star stories on their own; there were others that I connected with less, but overall it was a very strong collection that delved into complicated relationship dynamics extremely well. Favorites of mine were “How Am I Supposed to Talk to You?,” “I Will Crawl to Raleigh if I Have To,” and “Desert Hearts.”

Whose Story is This? by Rebecca Solnit (4 stars) – This is my fourth Rebecca Solnit book, and I continue to be impressed by her concise, clarifying essays. I’ll be posting a full review of this one closer to its release date (September 3rd); thank you so much to Haymarket Books for the opportunity to receive an ARC at BookExpo.

Honeybee by Trista Mateer (4 stars) -After giving a lot of thought to which BEA/BookCon book I would pick up first, I found that the decision was made for me on the first day of BookCon, when I found myself in a long line to get a signed book for a friend and needed something to read. I was drawn to a gorgeous little book of poetry I had purchased earlier that day: Honeybee by Trista Mateer. From the very first poem, I was hooked; I found myself wishing that the line was even longer so that I could read more (and after days of lines, that’s saying something.) Honeybee is a poetry collection but it’s also a memoir of the author’s experience ending a relationship with her girlfriend that had gone from beautiful and loving to unsustainable, in part due to her girlfriend’s internalized homophobia. It’s about the impossible feeling of being in love yet having a relationship that you come to realize is bad for you, and it’s told in eloquent snapshots of the breakup, its aftermath, the healing and questioning and fixating that are all part of how we deal with love in all its messy iterations. Several of the poems in this collection made me tear up or gave me goosebumps; all of them made me feel things. Highly recommend, even if you’re not typically a poetry reader.

The Seven Husbands of Evelyn Hugo by Taylor Jenkins Reid (3.75 stars) – After seeing this on so many reviewers’ favorites of the year lists, I expected to be wowed by this one. And although I really enjoyed the plot, especially delving into Hollywood in the 1950s-1980s, and the characters, particularly Evelyn Hugo herself, I wasn’t blown away by the writing.

Kingdom of Exiles by Maxym M. Martineau (3.75 stars) – Pokemon-like creatures and undead assassins, with a healthy dose of romance. If that sounds appealing to you, check out my full review here. Thank you so much to NetGalley and Sourcebooks Casa for the opportunity to read an eARC of Kingdom of Exiles in exchange for an honest review.

The Royal We by Heather Cocks and Jessica Morgan (3.5 stars) – Cute, fun rom-com that I listened to on audiobook. It’s really the perfect light, fluffy summer read featuring a Kate Middleton/Prince William type of love story, with plenty of drama and humor along the way. We follow Bex, an American exchange student at Oxford, and her unexpected romance with Nick, the future king of England, and the ensuing problems with tabloids and family drama that we know are coming but are fun to read about anyways. If you enjoyed movies like The Prince and Me or The Princess Diaries, or if you need a fix after Red, White, and Royal Blue, then you’ll like this one. Apparently there’s a sequel, The Heir Affair, coming out in 2020, which I’ll definitely be picking up.

And that’s it! How do you deal with reading when you’re in a reading slump? Do you take a reading break or try to power through? Let me know in the comments…

We’re halfway through 2019, which doesn’t feel real at all, but here we are, and it’s time for one of my favorite bookish tags: The Mid-Year Book Freak-Out tag! If you haven’t done it yet but want to, consider yourself tagged. The Mid-Year Book Freak-Out tag was created by Chami and Ely, and it’s a fun way to look back at the halfway point in your reading year and re-evaluate your goals for the latter half of 2019. I think the point of the tag is to just pick one book for each question, but I’m never able to narrow it down, so here we go:

I’ve only read three 5-star books so far this year (which I’m honestly really not happy about, even though of course star ratings don’t tell you everything about your experience with a book), so I’d say that so far the three of those are tied for my favorite of the year: The Mother of All Questions by Rebecca Solnit (essay collection), How Long Til Black Future Month? by N.K. Jemisin (short story collection), and The Underground Railroad by Colson Whitehead (historical fiction with magical realism element).

It’s a tie between two next-in-series books I really loved: In An Absent Dream by Seanan McGuire (portal fantasy) and A Prince on Paper by Alyssa Cole (contemporary romance).

3. New release you haven’t read yet, but want to:

Surprisingly, since I’ve been reading tons of new releases, I still have a whole bunch of 2019 books that have come out already that I haven’t had a chance to pick up. At the top of the list in terms of excitement are Storm of Locusts by Rebecca Roanhorse (post-apocalyptic fantasy), Middlegame by Seanan McGuire (fantasy, which gives me fall vibes so I’m waiting for September/October to start reading it), Magic for Liars by Sarah Gailey (fantasy), and A Cathedral of Myth and Bone by Kat Howard (fantasy short story collection, which I actually bought way back in January).

4. Most anticipated release for the second half of the year.

I’m working on a post now about my most anticipated releases for the second half of 2019, which should hopefully be up soon, and there are a LOT of them. At the top of my list are three books by authors I already love and one very hyped YA: The Testaments by Margaret Atwood (dystopian, sequel to The Handmaid’s Tale), Ninth House by Leigh Bardugo (contemporary fantasy), The Grace Year by Kim Liggett (dystopian, supposed to be a YA Handmaid’s Tale type of story), and The Right Swipe by Alisha Rai (contemporary romance). Honestly, there are a ton of books that I could answer for this question; I cheated by including 4 for this question and another 4 for #13.

This question isn’t about your least favorite book so far, but rather a book that you thought you’d love that didn’t live up to your expectations. The Seven Husbands of Evelyn Hugo by Taylor Jenkins Reid has been seemingly continuously raved about since its release;  more reviewers than I can count gave it 5 stars and included it among their favorites. I didn’t hate it or think that it wasn’t a good book, but I also was definitely not blown away by it. I enjoyed the story and the characters, but for me the writing was not impressive, and I was disappointed after all of the hype. And The Bride Test by Helen Hoang, although still a fun read, didn’t quite live up to Hoang’s first book, The Kiss Quotient, in my opinion.

This is another question about expectations, which deals with books that you weren’t sure about but ended up enjoying much more than you expected to. I was very surprised by Aurora Rising by Jay Kristoff and Amie Kaufman, which I picked up on a whim for a quick read but which turned out to be full of memorable characters and the start of a series I’ll definitely continue with; Bad Blood by John Carreyrou, which I was initially wary of since I’m not a big reader of any books about business or tech but ended up suspenseful and fascinating; Children of Blood and Bone, which I was afraid would get lost among so many other YA epic fantasy books but completely sucked me into its world; and Barbara the Slut and Other People, a very underrated short story collection I haven’t been hearing nearly enough about.

7. Favorite new author. (Debut or new to you)

I really enjoyed the first two books in Alyssa Cole’s Reluctant Royals series, but I wasn’t a huge fan of the love interests until the third book, A Prince on Paper.

I really enjoyed the band of misfits introduced in Aurora Rising, who are described on Goodreads as as “a cocky diplomat with a black belt in sarcasm; a sociopath scientist with a fondness for shooting her bunkmates; a smart-ass techwiz with the galaxy’s biggest chip on his shoulder; an alien warrior with anger management issues; and a tomboy pilot who’s totally not into him, in case you were wondering.” I also loved all three complicated, dimensional main characters in Sarah Porter’s Never-Contented Things, which was more about their relationship dynamics, both healthy and unhealthy, than it was about its fantasy story.

Honeybee by Trista Mateer is the type of book that makes me want to pick up more poetry. I read it in two sittings, and cried on a plane from the emotion of some of its poems.

I can’t think of a more delightful book so far this year than Red, White, and Royal Blue by Casey McQuiston, a wonderful political rom-com featuring an adorable enemies-to-friends-to-lovers story. If you haven’t picked it up yet, it’s a fantastic read for summer.

12. Most beautiful book you’ve bought so far this year (or received)

I apparently am very into detailed, multicolored covers right now, like Mouthful of Birds, Girl Made of Stars, and In an Absent Dream.

13. What books do you need to read by the end of the year?

My answers for this question also apply to #12 (most beautiful books) and #4 (most anticipated releases for the next half of the year). After the Flood by Kassandra Montag (post-apocalyptic fiction), The Ten Thousand Doors of January by Alix E. Harrow (historical portal fantasy), Lost in the Spanish Quarter by Heddi Goodrich (fiction), and The Deep by Rivers Solomon (fantasy).

Do you agree or disagree with any of my picks? Anything on your TBR? Let me know in the comments!