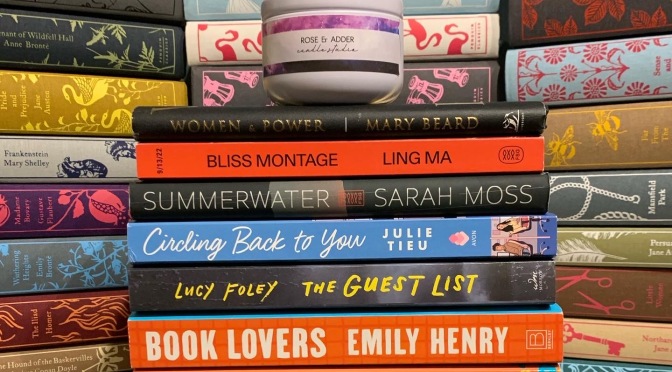 In August, I focused my reading on review copies and 2022 releases, and managed to have a very productive and enjoyable reading month. Let’s get into it!

Book Lovers by Emily Henry (5 stars) – After much ado, here is my long-awaited (long-awaited by me only, but still) definitive ranking of Emily Henry’s adult contemporary romances!
1. Book Lovers
2. Beach Read
3. People We Meet on Vacation
Here’s the thing, though–I LOVED Book Lovers. For me, it took every aspect that had potential but didn’t always stick the landing in her first two books and executed it in a way that just hit perfectly. I both laughed and cried at multiple points in the story, and I identified more with its main character than I have with an MC in awhile (not that I have to identify with a character to enjoy a book, I just liked seeing someone with a lot of my traits that are often portrayed as flaws in a protagonist role). For me, 5 star reads are often the ones that make me all-caps FEEL THINGS, and Book Lovers absoluely did that.

Bloody Summer by Carmen Maria Machado (short story) (5 stars) – This is how you write a short story. Machado crushes it with a story told like a research paper focusing on a small town in PA and its haunting, mysterious tragedy known as Bloody Summer. I got goosebumps countless times while reading this, and loved the mythology and faux historical elements. It’s free on KU, so go read it!!

Drunk on All Your Strange New Words by Eddie Robson (4 stars) – Drunk on All Your Strange New Words is one of those hidden gem 2022 releases that no one seems to be talking about. Its fast-paced blend of science fiction and murder mystery kept me hooked; its deeper concepts connects it to contemporary issues like xenophobia and the questionable accuracy of news reported through social media. It’s set in a future where humans have made contact with an alien species called the Logi, who can only communicate mentally, and utilize specially trained human translators like our main character Lydia in order to navigate Earth’s society. The problem for the translators is that the Logi’s form of mental communication causes a chemical reaction in the brain that simulates feeling of drunkenness, so the more translation she does, the more drunk she feels, with expected complications. What’s not expected, though, is that Lydia awakens after a strenuous evening of translation to find that her client, the Logi cultural attache for Earth, has been murdered, and she soon gets sucked into the mystery of how and why. It’s a twisty, surprising book that kept me guessing until the end, and it was so interesting to learn more about the future, information-saturated world that Lydia navigates through her investigation. I think this one is a great crossover read for mystery readers looking to dip their toe into science fiction, and vice versa.

Bliss Montage by Ling Ma (4 stars) – I wasn’t sure what to expect from Ling Ma’s debut short story collection, as I had mixed feelings about her debut novel, Severance. What I found was a collection that was at turns surprising, challenging, and unique, utilizing fabulism in interesting and varied ways as it explores the trauma of past relationships and complex relationships with both friends and family. My favorite stories from the collection were “Los Angeles,” in which a woman’s one hundred ex-boyfriends occupy an entire wing of the house she shares with her husband and children, and “Oranges,” which delves into a woman’s past relationship with her abusive ex. These stories shared similar themes and resonance; although I enjoyed the other six stories from the collection, these two stayed with me the most. I think that the endings to short stories are often controversial because they often are left open-ended, although typically with a note of impact that demands further contemplation; in this collection, I did feel that some of the endings felt unsatisfying in a way that took away from their overall meaning. That being said, I’d absolutely recommend this collection to short story fans, and I’ll be picking up whatever this author comes out with next.

I received an ARC of Bliss Montage from the publisher in exchange for an honest review.

Summerwater by Sarah Moss (4 stars) – A quiet, ominous novel set in an isolated Scottish valley where families have gathered to vacation, but where the rain refuses to stop as tensions simmer. I’d describe this as primarily a character study (of a lot of different characters staying in the valley) with a subtle disturbing through narrative. It wasn’t as strong for me as Ghost Wall, but still had an impact.

The Guest List by Lucy Foley (4 stars) – To say that I’ve been struggling with mysteries and thrillers in 2022 would be an understatement, so I’m happy to report that my mediocre thriller streak was broken by The Guest List by Lucy Foley. I knew going in that it’s a murder mystery set during a high profile wedding on an isolated Irish island, but I quickly found out that the mystery isn’t just who the murderer is, but who the victim is as well. It’s told in alternating perspectives from all of the main figures at the wedding: the bride, groom, best man, bridesmaid, wedding planner, and plus one, and each story kept my attention and built a fully developed character and perspective. The constant perspective switching kept the pace fast and ominous, as did the creepy setting. I’m planning to pick up another Lucy Foley read during the upcoming spooky season, in hopes that I’m now on a mystery hot streak!

I received a free copy of The Guest List from the publisher in exchange for an honest review.

The Dead Romantics by Ashley Poston (4 stars) – I’m definitely understanding the popularity of this ghostly adult contemporary romance debut from a previous YA author. Florence grew up feeling alienated in a small town due to her ability to see and communicate with ghosts, and despite her close-knit and loving family (who own and run a funeral home) she leaves for New York as soon as she can to launch her career as a writer. She ends up ghostwriting for a famous and widely loved romance novelist, but her world is shaken when she meets a new, intriguing editor and she finds out that her father has passed away. Things only get more complicated when she returns home for her dad’s funeral and her new editor appears–as a ghost. This romance deals heavily with grief and heartbreak, along with complex family dynamics, and despite its ghostly element, I’d say it will be totally fine for contemporary/realistic fiction readers, as it’s otherwise very grounded in reality. The romance itself is sweet, although I did wish for a bit more depth and development, and I really liked all of the side characters and small-town setting.

Women & Power by Mary Beard (4 stars) – This book is actually a transcription of 2 lectures the author gave regarding the classical roots of today’s misogyny, mainly as it’s presented in the spheres of politics and rhetoric. It’s a short little book (about 100 pages) which makes it great for a readathon; it’s also one of those books that I almost couldn’t believe I hadn’t read yet. It’s well-written, but I didn’t necessarily find it groundbreaking compared to other feminist texts I’ve read.

A Prayer for the Crown-Shy by Becky Chambers (4 stars) – The second book in a hopepunk scifi duology that’s focused on friendship, philosophy, and environmentalism. I think I liked this one more than its predecessor; it’s a very nice, cozy read.

Fated Blades by Ilona Andrews (3.5 stars) -Not my favorite Ilona Andrews, but this scifi that can be read as a standalone still works with their characteristic action and wit.

Circling Back to You by Julie Tieu (4 stars) – A workplace friends-to-lovers contemporary romance set in the California real estate industry that does an equally great job of establishing interesting family dynamics and a sweet relationship between its two main characters. I continue to be confused by the fact that Julie Tieu’s books have relatively low ratings on Goodreads, because I really enjoyed both this book and The Donut Trap, but I will also say that readers who felt The Donut Trap didn’t have enough emphasis on the romance will enjoy Circling Back to You more, as it’s much more central in this story.

I received a free copy of Circling Back to You from the publisher in exchange for an honest review.

Husband Material by Alexis Hall (3 stars) – I wanted to wait and try to process my feelings about this book before writing a review, but that doesn’t seem to be working, so now I’m going to attempt to just process them while writing this. Alexis Hall’s Boyfriend Material is one of my all-time favorite contemporary romances. It has everything that I love about the genre–an emotional opposites-attract romance that begins with fake dating; laugh-out-loud humor; flawed but lovable main characters; quirky yet well-drawn side characters; and a plot with a big emotional arc for both leads. And, at the beginning, Husband Material has most of these components as well; it starts off feeling exactly like a continuation of its predecessor, which was maybe a bit repetitive but I didn’t mind much at first because, again, I’m a big fan of Boyfriend Material. Unfortunately, this started to get frustrating; it felt like we returned to every side character in Boyfriend Material in order to give them unnecessary storylines, while main characters Luc and Oliver were fighting about the same things they did in book 1, except in a worse way, because it had all happened already and (supposedly?) they’d both experienced growth. The arguing only seemed to increase as the book went on, making it difficult for me to root for one of my favorite book couples of all time (and yes, I do understand that in life, couples fight, and that growth isn’t always linear, but the way it was written just didn’t make sense for their characters), and yet the book’s central conflict doesn’t seem to actually arise until the story is literally about to end. And, no spoilers, but the ending was what threw me off more than anything. The central conflict needed a LOT more buildup and groundwork in order to make sense and to have a satisfying payoff, and it just didn’t. I’m disappointed and frustrated; I didn’t hate this book at all, and really enjoyed the first half to 2/3 of it, but the way things played out makes me like the first part less in retrospect. I’d still highly recommend Boyfriend Material (and Rosaline Palmer Takes the Cake, another favorite Alexis Hall romance), but some readers may want to skip this installment.

Counterfeit by Kirstin Chen (3 stars) – I found this book equal parts interesting and frustrating; I wanted the world of counterfeit luxury purses to be explored more than it was, and I wasn’t a fan of the ending.