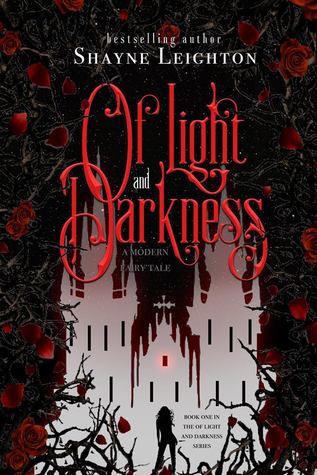 Book Review: Of Light and Darkness by Shayne Leighton

Of Light and Darkness by Shayne Leighton is a fantasy novel about a young woman named Charlotte who was abandoned as an infant and taken in by an unconventional guardian—a vampire. The vampire, Valek, a skilled healer, raises Charlotte in an occult city in the Czech Republic. There, they live surrounded by supernatural creatures of all varieties, including witches, shapeshifters, Elves, and fairies, but Charlotte is the only human present due to a strict code of laws that segregate magical society from interacting with the outside world. As Charlotte grows up, her feelings for Valek become more complicated than those between a guardian and his ward, and she must face these feelings as well as a society whose laws are rapidly becoming more strict and restrictive when it comes to vampires.

My favorite part about this story was easily the fact that the author was so inclusive of different types of supernatural creatures and so creative when it came to developing and populating her world. Not only do we have the standard sorts of monsters like vampires and fairies but we also get to meet a living scarecrow (who is sweet, gentle, and works in a store) and a half-man, half-spider (who sounds like he would be terrifying but actually isn’t scary at all). The idea of occult cities that exist alongside modern human ones but are hidden and sequestered was fascinating; the city that Charlotte and Valek live in is more like a small supernatural village, and the way the author described its preparations for fall celebrations made me picture it a little like the movie Halloweentown, which was sort of a delightful image. I also thought it was interesting that the main conflict of the story came from the fact that some of the supernatural creatures were trying to gain more power by scapegoating the vampires; the political maneuvering and propaganda that went into this was well thought-out and created very hateful antagonists.

Although I loved the setting and concept of this book, and I am in general a huge fan of vampires, I do have to say that I wasn’t a fan of the central romance between Charlotte and Valek. Valek has raised Charlotte since she was a baby and has always been a father figure to her, so it was hard for me to get behind them as a couple because they were essentially family. I also had a hard time pinning down Valek’s character in general; he’s portrayed often as an intellectual, kind-hearted, soft-spoken man whose main goal is protecting Charlotte, but he kills all of the humans he feeds on, and judging by his age, this means that he’s killed quite a lot of innocent people. He also never expresses remorse for doing so, or discusses the idea of feeding on humans without killing them, which is often an alternative for vampire characters. There is some discussion of feeding on animals instead, but this is not something he seems willing to do long-term. Charlotte, as well, is shown to be generally a brave and good-hearted person, but she’s also responsible for abducting humans for Valek to kill. I think that this attitude toward feeding on and killing humans would have fit better in a darker, grittier novel, but it seemed out of place in this story and with these characters.

In general, I’d describe Of Light and Darkness as a vampire novel with a fairytale vibe and the development of a found family at its core. It’s a story about love and magic and fighting against prejudice.

I received a free ebook copy of Of Light and Darkness from the publisher in exchange for an honest review.

June is over and it was a fun reading month! Lots of fantasy and beach reads for me this month, and even though I didn’t get any 5-star reads, I did find several that I loved and plan to re-read in the future. BookCon at the beginning of the month (and I do still plan on posting a rundown of how much I loved BookCon, I swear, I’m working on it) and a weeklong beach vacation with friends did cut into my reading time a bit, but I ended up with a very respectable number of books read.

The Kiss Quotient by Helen Hoang (4 stars) – Believe the hype about this one! It’s a sweet, sexy, well-written romance that even I, as someone who almost never reads contemporary romance, really enjoyed. Looking forward to more from this author.

Trail of Lightning by Rebecca Roanhorse (4 stars) – I’m so excited to have found a great new urban fantasy series to follow! In the world of Trail of Lightning, a series of rapid catastrophic climate-change-related events have fractured what was once the United States and buried much of it underwater on an accelerated timeline. In the aftermath, the Navajo nation of Dinetah has formed in what was once the Southwestern United States, and Navajo legends and magical powers are manifesting among its people. Our main character Maggie possesses gifts that help her to slay the monsters that threaten her people, but also have her questioning whether she herself may be monstrous as well. An especially strange new monster has Maggie set on a new path, where, in between fighting monsters and dealing with beings out of Navajo legends, she grows closer with an attractive young medicine man while being haunted by her history with her former love, the legendary Monsterslayer.

Urban fantasy can be very hit-or-miss for me, but I really enjoyed this book. With its post-apocalyptic setting and mythology-laden world-building, I think it would be great for readers of Ilona Andrews’ Kate Daniels series. I loved that Rebecca Roanhorse took the very real threat of climate change as inspiration for the book’s setting and used that as a jumping-off point to introduce Navajo mythology into the world. It was so interesting getting to learn more about Navajo myths and legends.

Maggie is a prickly, somewhat isolated main character at the beginning of the book, but we see a lot of growth even during this relatively short novel. I found it very easy to root for her, and I loved the concept of the clan powers, which played a large role in the book. The book’s secondary characters were also great; I especially loved Kai, her mysterious medicine-man love interest, and of course his grandfather Tah as well, but also thought Coyote was a great character.

I think the world that Rebecca Roanhorse created has the potential for so many more stories, and I’m very excited to see where she takes Maggie next. Definitely recommend.

*I received a free signed copy of Trail of Lightning at an autographing session at BookCon.

The Female Persuasion by Meg Wolitzer (4 stars) – The Female Persuasion is the second Meg Wolitzer book that I’ve read, after The Interestings, and I did definitely prefer this one. The Female Persuasion follows four viewpoint characters but centers on Greer, a young woman who becomes interested in feminism during her freshman year at a liberal arts college when she meets famous second-wave feminist Faith Frank. The book follows Greer, her boyfriend Cory, and best friend Zee as they navigate college and their lives and careers after college, and eventually Greer reunites with Faith to work for her new company, and we get a lot of Faith’s story as well. I did a mixture of physical reading and audio listening for this one, and I recommend both versions as the audio is very well done.

Overall I enjoyed this book and thought it was a very good read, but not an amazing one. I wasn’t sure at first that I liked all of the main characters, but by about halfway through the book I was really interested in all of them and their stories. I ended up wishing we got more time with Zee, a young activist, and Faith, because those two were probably focused on the least in terms of narration. Some plots twists were really shocking and others more predictable; the book meandered more than I’d have liked it to and I felt that it could have been much tighter in terms of structure. The main reason I picked this book up was because feminism plays a prominent role in the story, however, and I would have liked an even deeper focus on feminist movements and goals.

Mem by Bethany C. Morrow (4 stars) – I enjoyed this concise, thoughtful, well-written historical science fiction novel that asks what it means to be human. Recommend if you enjoy literary scifi. Mem takes place in 1920s Montreal, which is a really interesting setting for a science fiction book, and focuses on the idea of a new technology where the wealthy can pay to have memories they no longer want extracted and placed into living clones, or “mems,” who can only think about and reenact those memories. Except for our main character, Elsie, who is her own complete person but doesn’t know why.

The Dying Game by Asa Avdic (4 stars) – It’s really hard to classify The Dying Game into a single genre; if I tried, I’d have to say that it’s sort of a futuristic dystopian spy mystery/thriller without being fully any one of those things. In the world of The Dying Game, the Soviet Union never fell, and Sweden is one of the countries that’s been annexed. Our protagonist is working for the government when she’s asked to go on an unusual assignment: to travel to an isolated island with a group of potential applicants for a position with a mysterious organization, and to fake her own death and then judge the applicants on their responses to a crisis situation. Except that things don’t go as planned, and as conditions deteriorate on the island, we learn more about our protagonist’s mysterious past. It’s fast-paced and addicting to read, and it had a great amount of weirdness for someone like me who isn’t always interested in traditional thrillers.

We Are Never Meeting in Real Life by Samantha Irby (3.5 stars) – A funny yet moving personal essay collection that I really enjoyed. I highly recommend the audiobook, which is read by Irby herself.

Ace of Shades by Amanda Foody (3.5 stars) – I really enjoyed this book! Enne Salta travels to the nefarious City of Sin searching for her missing mother and has to struggle to keep herself alive in an environment unfamiliar to someone raised to be a lady. Along the way she meets Levi Glaisyer, a young street lord who she convinces to help her in her search, and also learns a lot about her and her mother’s mysterious pasts.

This book is getting a lot of comparison to Six of Crows, but they are definitely not the same book; their main similarity is that they both are set in cities in fantasy worlds and deal with street gangs. The similarities really end there (and Enne and Levi would definitely not come out well in a fight against the Six of Crows gang) but I still really liked this one. Great worldbuilding, likable characters, and a really cool magic system where everyone inherits abilities from each parent, and unique powers run through family lines that are used to secure power for their wielders.