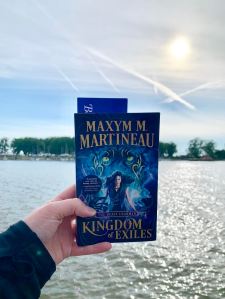 Pokemon-like creatures and undead assassins, with a healthy dose of romance. If any of that sounds appealing to you, I’d recommend Kingdom of Exiles as a very fun fantasy read.

Kingdom of Exiles follows Leena, the titular exile, who’s been thrown out of her home city for a crime she didn’t commit and forced to do things she finds abominable in order to survive. Leena is a Charmer, who, not unlike a Pokemon trainer, has the ability to find and catch magical beasts, whose powers aid her and whose companionship she loves. She wants to clear her name and return to her mystical home of Hireath, where Charmers and their creatures exist in a seeming utopia, but first she has to capture a creature capable of proving her worth. Enter Nox, whose guild of assassins has been hired to take Leena out, but who finds her intriguing and useful enough to strike a bargain: his assassins won’t kill her if she’ll find useful magical creatures for them. This kicks off a journey through gorgeously imagined settings, featuring a number of wonderful-sounding magical creatures, a healthy dose of banter, strong friendships, and plenty of action.

Fantasy worldbuilding, and placing your reader directly inside scenes that may be taking place in, say, an evil and magical forest, or a city inhabited by magical beasts and their Charmers, can be really difficult, but I think that’s something Kingdom of Exiles really excels at. As a character-focused reader, sometimes I’ll find myself having to force myself to re-read descriptions of scenery in books to try to imagine where exactly these characters are spending their time, and sometimes it can be a struggle. I never felt that way during this book, even though its setting is wholly unique. The variety of magical creatures in this book is another huge strength; every time we were introduced to a new one, I was fascinated by their uniquely imagined abilities, and the powers and world of the Charmers was a great concept.

What I liked less about this book was, unfortunately, the romance. I liked both Leena and Noc quite a bit, and I very much like the idea of them together, but I did feel that the chemistry was a bit lacking for me. I also found myself struggling with certain plot points towards the end of the story, which felt rushed and/or jarred slightly with the pacing that had been established earlier in the book.

Overall, I found this to be a very enjoyable fantasy read, and I’m quite interested to hear more about what happens to Noc, Leena, and friends in the second book. I’m also very much hoping for even more magical creatures. 3.75 stars.

Thank you so much to NetGalley and Sourcebooks Casa for the opportunity to read an eARC of Kingdom of Exiles in exchange for an honest review.

One thought on “Book Review: Kingdom of Exiles by Maxym M. Martineau”