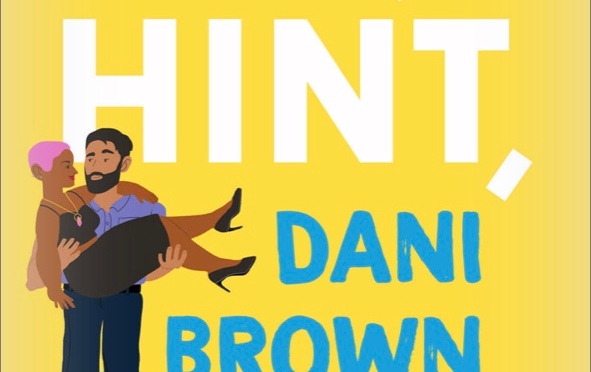 The follow-up to last year’s Get a Life, Chloe Brown, which I enjoyed (check out my full review here), Take a Hint, Dani Brown follows Chloe’s younger sister Dani, a driven Ph.D. student who prefers casual hookups to relationships, and her friend-turned-love-interest Zafir, a former rugby player who runs a nonprofit dedicated to teaching boys about managing their emotions and avoiding toxic masculinity, while also working security at Dani’s university. The novel begins with Dani casting a spell (she’s a witch!) to find the perfect hookup buddy, because she’s afraid to enter into deeper relationships after being hurt in the past and internalizing the idea that she’s too focused on her own life to give enough in a relationship. A few months later, Dani’s trapped in an elevator during a fire drill at her university, and friend/security guard Zaf stages an overdramatic but sweet “rescue,” which is captured on the cell phones of the undergrads outside. They’re assumed to be in a relationship and given the moniker #DrRugBae and, although being social media famous is something neither of them are particularly looking for, Zaf discovers that it’s actually a great way to promote his nonprofit. Dani and Zaf agree to enter into a fake relationship, but Zaf has been harboring feelings for Dani ever since they met, and despite her aversion to relationships, Dani soon begins to fall for Zaf as well.

I can be picky when it comes to contemporary romance, but I loved this one. I actually liked it a lot more than I did Chloe Brown; not that I didn’t enjoy that one, but I wasn’t a fan of Chloe’s love interest. Both of Dani Brown‘s main characters are compelling, relatable, flawed, and trying to grow; there’s also a strong focus on mental health, as Zafir is dealing with anxiety and grief, and Dani is working on the way she perceives herself after past relationship issues. Although I loved both main characters, I identified with Dani SO MUCH–we’re both nerdy, obsessive, career-focused women who have trouble making time and emotional space for relationships. There were so many instances and descriptors of Dani that really resonated with me, and I felt so seen in this character. Like her, I’ve had a hard time picturing the kind of relationship where someone would not only not be bothered by my devotion to my career, but be supportive of it, and it was great to see a depiction of this on paper.

I also really liked that there was a reversal of traditional gender roles in Dani Brown, with Dani being commitment-averse and Zafir a relationships-only kind of guy; this theme is a constant throughout the novel. There’s also a meta discussion about the power of romance novels themselves that I really loved (Zafir is a big fan; Dani doesn’t read them and doesn’t quite understand the appeal) and great discussion about the importance of work/life balance. The entire book felt extremely current and relevant in its themes; I can’t wait to see what the next book, which focuses on youngest Brown sister Evie, will focus on.

I’d highly recommend this one to contemporary romance fans, and in particular to anyone who enjoyed Alisha Rai’s Girl Gone Viral, as both books involve fake relationship hashtags that spiral out of control, and also focus heavily on mental health issues.

I received an eARC of Take a Hint, Dani Brown from the publisher via NetGalley in exchange for an honest review.