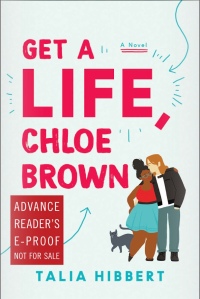 Get a Life, Chloe Brown by Talia Hibbert

This contemporary romance, set in England, follows web designer Chloe Brown, a guarded woman dealing with her fibromyalgia diagnosis, and Redford Morgan, an artist-turned-property-manager, who’s dealing with insecurity and the aftermath of a traumatizing relationship. Our story kicks off when Chloe undergoes a near-death experience and decides that she needs to, well, get a life–to stop being afraid to make bold life decisions and go out and experience the world. She initiates this by moving out of her family’s house, but stalls trying to accomplish any of the next few tasks (ride a motorcycle, travel the world with minimal luggage, have meaningless sex, etc) until she meets Red, who she seems to think is the sort of “dangerous” guy who could help her with her list, but who in actuality is a complete sweetheart who happens to ride a motorcycle. While working through Chloe’s list, with some necessary modifications, the two confront their mistaken first impressions of each other (Red assumes Chloe is a rich snob, Chloe assumes Red is carefree and full of himself) and end up falling for each other.

There’s a lot to like about Chloe Brown, chief among them being the titular main character. Chloe is smart and fierce, but she’s also grappling with a lot of insecurities and still working on figuring herself out, especially in the context of the aftermath of her fibromyalgia diagnosis. She’s instantly likable, and scenes from her perspective are hilarious, full of surprising quips and witty observations; she’s a character I would happily spend more time with. I would also be completely on board with more books involving Chloe’s family, since her two awesome sisters and badass grandmother stole every scene they were in. I wasn’t as much of a fan of her love interest, Red, who wasn’t nearly as charismatic of a viewpoint character, and I felt that their romance, once it began, progressed much more quickly than felt natural. But there was another issue I had while reading this book, which I’m probably going to explain terribly, and which probably will be a reason many people love this one.

At risk of sounding like a terribly cynical person, I was taken aback by how considerately everyone treated each other in this book. Let me explain: Chloe Brown is ostensibly a hate-to-love romance, but the main characters never actually hate each other, and even if they make certain assumptions, they always treat each other with an abundance of consideration and respect. There are misunderstandings and disagreements, sure, but they’re all dealt with incredibly nicely. Which is fine! It’s fiction, it’s a romance novel, I totally understand that respect, consideration, and niceness are how we should all treat one another in life and in relationships. But for me, a lot of the time it did feel unrealistic, as people tend to be much more imperfect and messy when it comes to emotions, and although I can of course suspend disbelief when it comes to fiction and romance a lot of the time, I think I’d have preferred a messier story to a more perfect one. I think a lot of people might disagree with me on that, but I think it comes down to a matter of preferences in romance: I tend to like a little less ease and a little more angst, whereas Chloe Brown definitely falls into the “sweet” category, which was why, although I did overall enjoy the read, it didn’t get a higher rating from me.

I received an eARC of Get a Life, Chloe Brown from NetGalley in exchange for an honest review.

4 thoughts on “Book Review: Get a Life, Chloe Brown by Talia Hibbert”