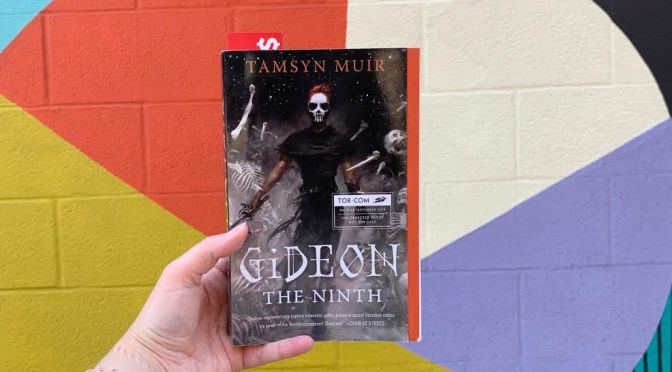 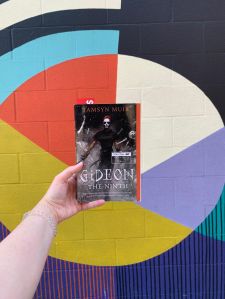 I’d like to start this by saying that Gideon the Ninth is, without question, my absolute favorite book of the year so far, and I did not at all expect it to be. Sure, I’d been hearing a lot of hype and seeing plenty of 5-star reviews leading up to BookExpo, and the premise sounded intriguing (it’s frequently pitched as “lesbian necromancers in space!”), but I’ve been burned by hype before, and I tend to go into most popular new releases with cautious optimism rather than sky-high expectations as a result. And then, less than 100 pages into Gideon the Ninth, I realized that my cautious optimism had turned into full-blown joy at how much I was absolutely loving  this book, and that I was reading something really special.

We’re thrown into the bleak, empty, skeleton-filled world of the Ninth House, where Gideon Nav, a sword-obsessed indentured servant, schemes and dreams of escape. An opportunity arises in the form of a magical competition of sorts between the nine Houses of the realm, where Gideon will need to form a tenuous alliance with her greatest enemy, Harrowhawk, the Reverend Daughter (princess/cult leader) of the Ninth, in order to survive. I don’t want to give away any more of the plot than that; I honestly feel that going in with very little plot knowledge is ideal, since Gideon the Ninth is full of twists, but I will tell you that the plot that we’re thrown into contains an abundance of dark humor, necromancy, alliances, betrayals, murder, scheming magical Houses, escape room-esque magic tasks, sword fights, and sarcasm.

It’s hard to express just how happy reading Gideon the Ninth made me feel. There’s this absolutely wonderful feeling you get when you’re completely obsessed with a world that you’ve only just met a few hundred pages ago, and it’s almost shocking how quickly you’ve been immersed, and you desperately want to keep reading because it’s so awesome, but you also want to slow down so that the book won’t end. That’s how it feels to read this book.

Tamsyn Muir imbues this story with so many completely intriguing concepts; the magical and political systems are intricate and yet we, as newcomers to this world, are able to become enmeshed in them alongside Gideon, whose isolation in the Ninth have kept her both literally and figuratively in the dark. And then there’s the characters, every one of whom I wished for more time with, because they’re all flawed, complicated people practicing dangerous magic and/or deadly swordsmanship, and because their interactions with each other illustrate the cultural differences between each House.

In summary: read this book. It comes out on September 10th, it’s the first book in a trilogy whose second book I literally cannot wait to read, and it’s something special.

Thank you so much to Tor for the opportunity to read and review an ARC of Gideon the Ninth.