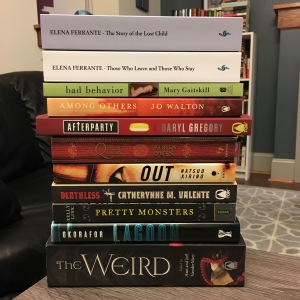 As usual, I didn’t think I was going to buy a lot of books this month.

As usual, I was wrong.

This month, I discovered bookoutlet.com, which has somehow been hiding from me all this time. I blame Bookstagram entirely for my bookish purchases this month, as almost all of them (all except the Ferrante books and Among Others) were from Book Outlet and the only reason I heard of the site was from looking at book haul posts. The prices on this site are ridiculously good, so I don’t feel too guilty about my binge-buying; I’m so excited about the books I was able to find, several of which are difficult to find in bookstores. I pretty much want to read them all immediately, but since I’m in the middle of 5 different books right now, that’s probably not a good idea.

So here’s what I picked up!

Those Who Leave and Those Who Stay by Elena Ferrante – I started reading this at the beginning of the month and am on pause until I get back in the Ferrante mindset. The perils of being a mood reader!

The Story of the Lost Child by Elena Ferrante – I caved and bought the last Ferrante book so that I’ll have it to start when I finish book 3 and also work up the courage to see how this emotionally gripping quartet ends.

Among Others by Jo Walton – I read my first Jo Walton book (The Just City) earlier this year and loved the originality of its concept. She’s a really prolific writer and pretty much all of her books sound amazing; Among Others got a lot of hype a few years ago when it won both the Hugo and Nebula awards for Best Novel. From the Goodreads review, it’s “at once the compelling story of a young woman struggling to escape a troubled childhood, a brilliant diary of first encounters with the great novels of modern fantasy and SF, and a spellbinding tale of escape from ancient enchantment.” Sounds perfect.

The Weird edited by Ann and Jeff Vandermeer – this is an anthology of weird fiction that I’ve been coveting ever since I saw it on a shelf in the Strand a few years ago. It is absolutely gigantic and the cover features red octopus arms holding a book in some sort of stone cathedral.  The $30 price tag scared me away, but then I saw it on Book Outlet for under $7 and I had to go for it. Also, it’s edited by Ann and Jeff Vandermeer; Jeff Vandermeer is the author of the Southern Reach trilogy, which I loved, and they are both highly respected SF&F editors.

Deathless by Catherynne M. Valente – Valente is on my list of “authors I think I will love but haven’t actually read anything by yet,” and this book, which is a retelling of a Russian folk tale, sounds so intriguing. From Goodreads: “Deathless, however, is no dry, historical tome: it lights up like fire as the young Marya Morevna transforms from a clever child of the revolution, to Koschei’s beautiful bride, to his eventual undoing. Along the way there are Stalinist house elves, magical quests, secrecy and bureaucracy, and games of lust and power. All told, Deathless is a collision of magical history and actual history, of revolution and mythology, of love and death, which will bring Russian myth back to life in a stunning new incarnation.”

Pretty Monsters by Kelly Link – I’ve read two books of short stories by Link so far and loved both of them. Her style of writing is odd, creepy, and endlessly creative; this is technically a compilation of YA stories, but some of these overlap with the stories in her adult books.

Lagoon by Nnedi Okorafor – this is a first-contact-with-aliens story that takes place in Lagos, Nigeria, and I’ve been hearing nothing but awesome things about it. The premise from Goodreads says: “When a massive object crashes into the ocean off the coast of Lagos, Nigeria’s most populous and legendary city, three people wandering along Bar Beach (Adaora, the marine biologist- Anthony, the rapper famous throughout Africa- Agu, the troubled soldier) find themselves running a race against time to save the country they love and the world itself… from itself. ”

Afterparty by Daryl Gregory – I may use this book for the “read a book about religion” task for the Read Harder challenge. It’s set in the near future after the “smart drug revolution” where people can now design and create their own drugs. Someone eventually creates a drug called Numinous that simulates religion and kicks off what looks like a crazy story.

Out by Natsuo Kirino – From Goodreads, “Natsuo Kirino’s novel tells a story of random violence in the staid Tokyo suburbs, as a young mother who works a night shift making boxed lunches brutally strangles her deadbeat husband and then seeks the help of her co-workers to dispose of the body and cover up her crime.” Sounds intense and absorbing.

Bad Behavior by Mary Gaitskill – I think I heard about this book on Flavorwire and have meaning to get to it for awhile; I’ve been really into short story collections lately. Goodreads says, “Powerful stories of dislocation, longing and desire which depict a disenchanted and rebellious urban fringe generation that is groping for human connection. (Or, more simply put, the angst of people-who-wear-black.)”

The Quick by Lauren Owen – I mean, I’m really down for anything involving vampires, but I really hope this one’s good. It’s set in the 1890s and centers on a woman’s search for her brother through the mysterious underworld of London; I’ve heard mixed reviews but I want this to work for me.

Has anyone read any of these? How did you like them? And what book did you buy in June? Let me know!