It’s Monday! What are you reading? is a weekly bookish feature hosted by The Book Date (http://bookdate.blogspot.com/).

August feels like it’s off to a slow bookish start; I was in a wedding this past weekend, so that’s where a lot of my time has been going, but I’ve also been reading more slowly than I typically do and it feels sort of strange. Let’s figure out why!

I decided to kick off August with Harry Potter and the Cursed Child; I bought it on July 31st (I’m not a midnight-release-er) and, although my expectations weren’t sky-high, was intending on binge-reading it that day so that I could experience it before being accidentally spoiled somehow. This…didn’t happen. Instead, I read about 30 pages of the play and it started to make me really sad because I just wasn’t liking it/connecting to it. It took me several days to work up the desire to pick it back up, at which point I sort of forced myself to accept it for what it was and was able to enjoy some aspects of it. I’m not going to do a whole review here (I might do one later, though…) but I think that a lot more thought and detail should have gone into any sequel to the Harry Potter series.

The second thing that’s been slowing my reading down is that I’ve (finally) discovered Booktube! (I know.) (Yes, it really did take me this long.) For some reason I hadn’t thought I’d enjoy watching YouTube videos by fellow bookish people; I thought it wouldn’t hold my attention as much as reading bookish blogs. Turns out, I was very wrong, and BookTube is awesome, and I’ve already added a ton of books to my TBR based on recommendations that I’ve gotten on there. So far, these three are my favorite Booktubers that I’ve found:

Under the Radar Books https://www.youtube.com/channel/UCu1Yn5B7KGk3OWT1fcQko_Q

If anyone could recommend me more Booktubers to follow, or if you have a channel, please let me know! As I said, I’m a newbie, and I’d love to find more awesome bookish people to get recommendations from. 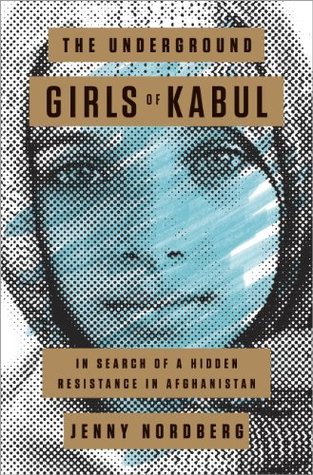 I was also having some audiobook issues this week (shocking, I know). The audiobook I intended on listening to this month, Running With Scissors by Augusten Burroughs, was…not great. The writing was pretty good, but I only listened to about half an hour of it before realizing that I really did not like it. I went on Goodreads to check out reviews and see if I should push myself to keep reading, and I actually saw in a bunch of reviews that Burroughs had been sued for misrepresenting the family he talks about in his books, and that large parts of the “memoir” had been fabricated. I did not know this when I picked up the book; if I’d wanted to read fiction, I would have! So I went ahead and DNF’d.

That actually worked out well, since my library had The Underground Girls of Kabul: In Search of a Hidden Resistance in Afghanistan by Jenny Nordberg available. I started it today and it’s fascinating; it focuses on the lives of women in Afghanistan and particularly the custom of disguising and raising some young girls as boys.

I’m also in the middle of Vicious by V.E. Schwab as my main physical book–actually, it’s the only physical book I’m reading right now, which is super weird! I’m typically such a multi-book reader. Anyways, I’m a little more than halfway through, and I sort of thought I’d have finished it already, but like I said, August has been a slow month so far. I really like the characters and how the book jumps back and forth in time to tell the story; however, I’m not absolutely blown away by this book. It’s good, but not amazing. So far.

What are you guys reading? Let me know!