Warning: this is a very nerdy and picture-heavy post 🙂

I’ve been MIA from the blog a bit lately, mainly because of work, but also because last week I went to visit two of my friends from grad school in New York. I go to the city pretty often (usually a few times a year) but this was my first trip since I started book blogging and bookstagramming, so I decided that in addition to catching up with my friends (which was amazing!) I was going to nerd out hard.

And nerd out I did! I had the opportunity to do some awesome bookish sightseeing, as well as add a bunch of books to my ever-expanding TBR shelf, because I have a book buying addiction that I’m really not even attempting to curb at this point. The main event I was looking forward to, book-wise, was a visit to the Strand, the famously gigantic indie bookstore (18 miles of books!). I’ve been twice before and absolutely love climbing up the ladders to explore its gigantic shelves. 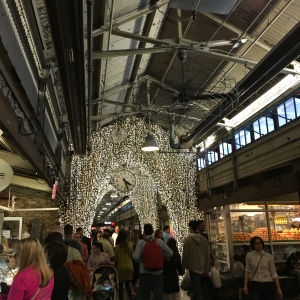 My first bookish stop was Chelsea Market, which I’ve somehow never been to before. I used my book-ray vision to find this extremely cute bookstore, where I stared hungrily at all of the books; they had some gorgeous editions of modern classics that I somehow resisted buying.

The next day, I stopped for a snack at a coffee shop my friend recommended, as she had passed it by and immediately thought of me when she noticed the wall of books inside: Ground Central Station on East 52nd. I loved the interior, which was dimly lit, with eclectic furniture and a wall of bookshelves; it seemed like it would be a perfect place to escape the craziness of the city and pop open a book.

I then headed toward a main literary New York landmark, and one I was embarrassed not to have visited in the past: the New York Public Library!

I used to live in Boston and was pretty obsessed with the Boston Public Library; now I am totally devoted to my local library system that has the most ridiculously wonderful (and frequent) used book sales that I have ever encountered. But now I know that the NYPL, as well, is going to hold a special place in my library-obsessed heart.

First of all, the library really builds up your anticipation as you walk along East 41st aka Library Way; there are plaques set into the sidewalk with quotes from famous writers that you read as you walk.

Then you finally get there and see the humongous library in all its glory: 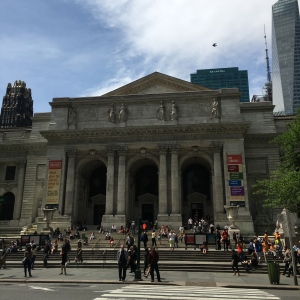 And then you go inside and start geeking out about how beautiful it is: 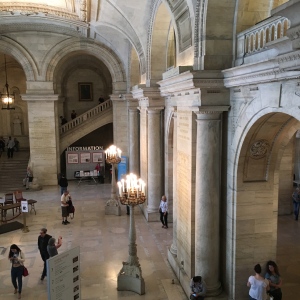 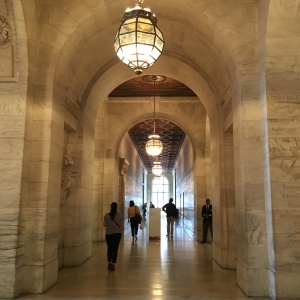 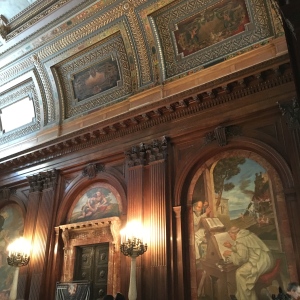 And then you discover that there is a STORE inside the library that not only sells books and bookish accessories but whose proceeds also benefit the library system! Seriously, this is a fantastic idea and one that I wish other libraries took advantage of (I’m looking at you, Boston). I ended up buying: a tote bag; a book of love poems by Pablo Neruda; and a mug with a Jane Austen quote about reading on one side and the NYPL lion on the other.

The moral of this story is: if you are a bookish person and you happen to be in New York, GO TO THE LIBRARY. You will not be sorry!!

My last bookish stop was the main event: the Strand!

Honestly, I was so wowed by the library that the Strand wasn’t quite as exciting for me as it was the first two times I’ve gone. But it was still awesome! And I still bought a bunch of books!

If you’ve never been to the Strand, it has a bunch of really fantastic aspects that I always enjoy. The basement floor has reduced price books, all of which are in great condition; there are sooo many bookish goodies including mugs, clothing, bags, writing accessories, etc; the shelves extend up so high that you have to use strategically placed ladders to find the books you want; and the display tables are excellently curated with not only a New Books table but also tables for Banned Books, books you may have missed, books everybody loves, etc. And then there are the stacks, which are ridiculously extensive and so fun to spend time exploring. 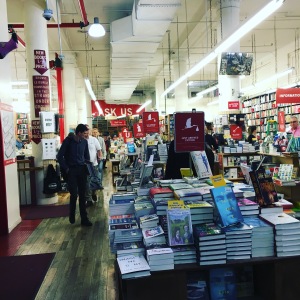 I ended up buying another mug (this one says “A well-read woman is a dangerous creature”) and four books: Brideshead Revisited by Evelyn Waugh, The Buried Giant by Kazuo Ishiguro, The Daylight Gate by Jeanette Winterson, and Nobody is Ever Missing by Catherine Lacey.

Also, on a non-bookish note, do any of you watch Unreal? Because this happened:

Does anyone have any recommendations for bookish spots in NYC? I want to make a list of new places to check out during my next visit 🙂