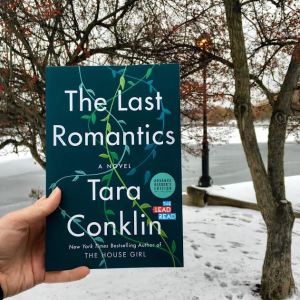 I had no idea when I started The Last Romantics that I’d end up loving it so much. It’s the story of the unbreakable and transcendent bonds between four very different siblings, and how even their disparate paths in life can never truly keep them apart. It’s a story about what’s really important when the world is shattering around you, and how we grow together and apart from the people who mean the most in our lives.

The story starts in the future, in 2079, when a renowned poet named Fiona Skinner is giving a talk about her work in the midst of a world destabilized by climate change. Her talk turns to her three siblings, her source of love and inspiration throughout her life, and spans a century in its telling. The four Skinner siblings’ reliance on each other is cemented during a period in their childhood known as the Pause, when their mother enters a deep depression and they commit to taking care of one another until she recovers. As they grow older, their bonds are tested by the very different directions they find themselves moving in, but their childhood personalities continue to define them; Renee, the eldest, has always been the smart, responsible one with her life together; Caroline is more emotionally connected with those around her; Fiona, the youngest, buries herself in poetry and words; and Joe, their brother, has always been somewhat of a golden boy, although the cracks in this persona reveal themselves more and more over time.

I don’t usually tend to read books that could be considered family sagas, but I was really drawn to this one because of its emphasis on the bonds between siblings. I wasn’t aware prior to starting this book that there was any type of science fictional element; I have to say that although the science fiction is light, this was a huge plus for me as a lover of SFF. Having climate change woven into the story, and the hints throughout of a future that is far less stable than the world the Skinner siblings initially grew up in, felt very real and gave the story’s emotional bonds even more depth as we feel the fragility of the world. The Last Romantics is beautifully structured, with the story unfolding in bits and pieces throughout the Skinners’ lives, even as we’re given hints of the future world and the story’s telling. The writing throughout is also gorgeously done, with each of the four siblings given equal weight and their stories equal importance, even as Fiona remains our primary narrator. I have to say that I really loved this book; I felt very connected to the story and invested in all of the siblings’ lives throughout. I’ve already been recommending it to people and will be continuing to do so, as I think it’s a book that, with its emphasis on family, can find resonance with just about anyone.

I received an ARC of The Last Romantics from the publisher in exchange for an honest review.