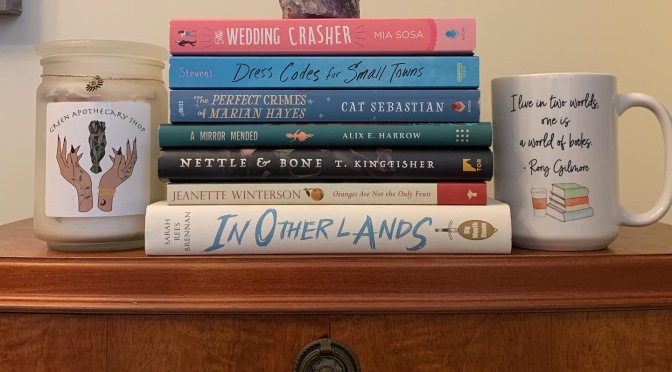 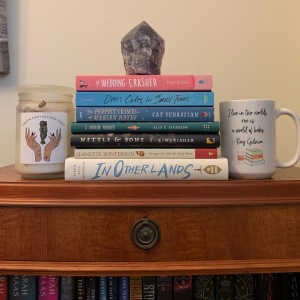 In June, I focused on reading books featuring LGBTQIA+ authors and characters, and also tried to finish a few books I’d started in previous months. I found one new favorite, thoroughly enjoyed a re-read, and found a bunch of excellent 4-star books from new-to-me authors. Let’s get into it!

Oranges Are Not the Only Fruit by Jeanette Winterson (5 stars) – This is Jeanette Winterson’s first and semi-autobiographical novel about growing up as the queer adopted daughter of an extremely strict and fanatically religious mother. This is also my fourth time reading Winterson, and her prose always impresses me; the novel is full of stories, metaphors, and digressions as we learn about Jeanette’s childhood and adolescence that is dominated by her devout faith, encouraged by her mother and congregation, and eventual young adulthood and understanding of her sexuality, which conflicts with the rigid rules of her church. My favorite Winterson novel remains The Passion, but Oranges is just as impressive, made even more so by the fact that it was written when she was only 24.

In Other Lands by Sarah Rees Brennan (re-read) (5 stars) – 5 stars is not enough. I loved the crap out of this book.

In Other Lands fits right into that niche genre of books that satirize and also pay homage to traditional portal fantasy stories, like Lev Grossman’s Magicians series, or Rainbow Rowell’s Carry On, or Seanan McGuire’s Wayward Children series. If you liked any of those, you’ll also probably love this book. We follow Elliott, a young bisexual British boy, who’s given the opportunity to enter the fantasy realm of his dreams–except nothing there is as he expects it to be, and he finds himself constantly challenging society’s expectations and norms. Elliott is extremely intelligent but very difficult in social situations, and he’s constantly butting heads with everyone around him except for his crush, Serene-Heart-In-the-Chaos-of-Battle, a beautiful elf maiden who is also, like all female elves, a deadly warrior. The two of them form an at-first tension-filled friend group with Luke Sunborn, a seemingly perfect stereotypical male fantasy hero, with the three of them gradually becoming closer and learning more about accepting each other’s faults as they progress in their training to join the Border Guard, which acts as a military force policing both the fantasy realm and its border with the human ones.

I will say that if you are a stickler for structured plots, then you may have issues with this book. Personally, as long as I’m enjoying what I’m reading and I love the characters, I could care less about having drawn-out battle scenes or whatever, so it didn’t bother me at all, but I could see some readers taking issue with the fact that the story meanders without following a traditional conflict/resolution fantasy plot structure.

This book is a beautiful story about growing up and learning to challenge traditionally held beliefs, which may not be the right ones, and learning to understand and accept yourself for who you are. It’s about friendship and how people can complement each other while still being from very different backgrounds. It’s about learning your strengths and using them to make the world a better place. It made me laugh out loud continuously and also cry multiple times. It’s one that I can see myself re-reading and enjoying just as much each time. It’s honestly wonderful, and I really hope that more people read it.

Edit: Upon re-read, In Other Lands has become one of my favorite books of all time. You should all stop what you are reading and immediately read this instead, because it’s better.

Nettle & Bone by T. Kingfisher (4 stars) – Finally finished and ended up really enjoying this short fantasy novel filled with dark fairytale vibes. Nettle & Bone takes a lot of typical fairytale elements–fairy godmothers, princesses, the goblin market, enchanted toys, seemingly impossible quests–and distorts them, presenting them in unexpected and unconventional ways. Characters that might be sidekicks or background players in most stories take center stage, and strength takes different forms as a band of misfits slowly assembles to take on an evil prince. This was my first time reading T. Kingfisher, but it won’t be the last. I’d recommend this book particularly to fans of Seanan McGuire’s Wayward Children series, as it has some similar thematic elements.

She Gets the Girl by Rachael Lippincott and Alyson Derrick (4 stars) – This YA romance set during freshman year of college was a surprise hit for me. It’s told in alternating perspectives between two girls experiencing issues in their love life who form an unexpected friendship (and more) when they agree to help each other navigate their issues. It was very cute, had great characterization, and was full of genuine emotion.

Dress Codes For Small Towns by Courtney C. Stevens (4 stars) – This big-hearted YA contemporary that is an extremely relevant book to be picking up during Pride month and also in the wake of these devastating anti-LGBTQIA+ laws being passed across the country. Billie and her friend group live in small-town Kentucky and are grappling with their sexualities and gender identities while facing pressure from many people in their community, including Billie’s preacher father, to conform to expected norms. Despite this, the friend group stays true to themselves and work through growing up, falling in and out of love, and helping their community keep its traditions while showing others that you don’t need to conform to be a good person. Honestly, it’s everything I wished Shara Wheeler had been, and I highly recommend it!

Shake Things Up by Skye Kilaen (4 stars) – I loved this second book in Kilaen’s Love at Knockdown series just as much as the previous one, Get it Right; Kilaen has a writing style that’s very comforting and kind to read. This novella depicts the romance between an established couple and a woman they meet under unexpected circumstances that develops as the three take a road trip to a music festival together.

The Perfect Crimes of Marian Hayes by Cat Sebastian (4 stars) (ARC) – This historical romance follow-up to The Queer Principles of Kit Webb, a surprise favorite for me from last year, was just as enjoyable as its predecessor. We’re following two bisexual leads, which is great to see in a historical romance, on the run after one of them murdered her husband (she had reasons!). Their banter and relationship dynamic was well-crafted and fun to read about, and Cat Sebastian does a great job at integrating relevant political and societal issues into her romances. I really enjoyed this read, and look forward to more from this author.

I received an ARC of The Perfect Crimes of Marian Hayes from the publisher in exchange for an honest review.

A Mirror Mended by Alix E. Harrow (4 stars) – The sequel to A Spindle Splintered, a remixed Sleeping Beauty novella, this one focuses on the Snow White story, and more specifically the Evil Queen character trope. I enjoyed it just as much as its predecessor; it’s hard for me in general to not want to pick up any kind of fairy tale remix/retelling situation.

The Wedding Crasher by Mia Sosa (3.5 stars) – I didn’t enjoy this one quite as much as Sosa’s previous contemporary romance set in the D.C. area and focused on the same family, The Worst Best Man, but I enjoyed returning to the setting and seeing a lot of the same characters. It’s got the fake dating trope, which I normally love, but the romance was not as enjoyable for me.

D’Vaughn and Kris Plan a Wedding by Chencia C. Higgins (3.5 stars) (ALC) – This was a very cute, reality TV-inspired contemporary romance between a fitness influencer and a school counselor who face challenges in their attraction to one another as the TV show that introduced them causes them to question what parts of their relationship are real vs. fake. D’Vaughn and Kris are both contestants on the first queer season of Instant I Do, a reality show where contestants are randomly paired together and have to convince their friends and families that they are getting married and planning a wedding in only 6 weeks, all while dodging hurdles from the producers. There’s instant attraction between the two of them, but D’Vaughn has auditioned primarily to win the monetary prize and secondarily to help come out to her family, while Kris joined the show in hopes of falling in love. The two leads had great chemistry, and I thought the premise was really fun and presented the right amount of challenges to their relationship; my issue with the story lay with the fact that both D’Vaughn and Kris were forced to lie to friends and family members that they were supposedly extremely close to, without much guilt or regret, throughout the book. I had assumed that revealing the truth to their families would be a significant source of conflict, but it was handled very anticlimactically, which for me really hurt the emotional resonance of the story. Overall, though, it was a cute, fun read with great audio narration.

I received an advance listener’s copy of D’Vaughn and Kris Plan a Wedding from the publisher via NetGalley in exchange for an honest review.

Never Been Kissed by Timothy Janovsky (3 stars) – A contemporary romance set around a drive-in movie theater and the attempt by our two love interests to unearth the hidden gem of a pioneer female filmmaker. The premise and plot were somewhat fun, and I liked the main character, but the love interest lacked personality and I was never quite on board with their chemistry for that reason.