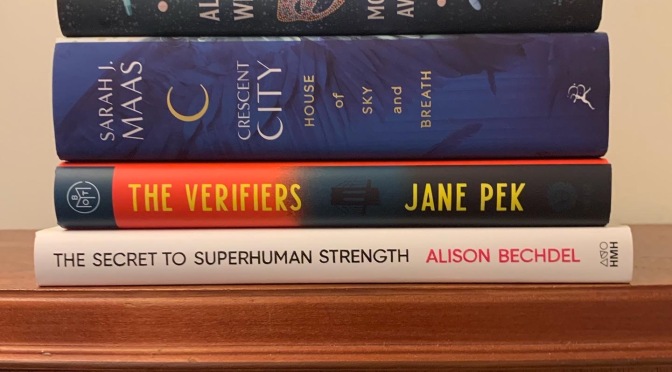 Unfortunately, March wasn’t my favorite reading month, although I did still find several books I enjoyed (including a new 5-star read!). Several books I chose were a bit disappointing (or more than a bit, in the case of one in particular). Let’s get into the stats and reviews!

All’s Well by Mona Awad (5 stars) – This Shakespeare-infused fever dream reminded me of everything I love about Mona Awad and her creative, entrancing writing. (A reminder: she wrote my FAVORITE BOOK OF ALL TIME, Bunny!) I think that anyone who loved this book will also really enjoy Margaret Atwood’s Hag-Seed, and vice versa, as both use Shakespeare’s works in twisted and modernized ways, but All’s Well is also completely unique. On its surface, it’s about Miranda, a theater professor experiencing chronic pain after a tragic fall off of a stage, who miraculously finds a respite after encountering three mysterious men in a bar; it’s infused with aspects of All’s Well That Ends Well, the play that Miranda insists on her students performing despite their objections, as well as Macbeth, the play that the students actually want to perform. It’s tricky and fabulist, and at times reminded me of cautionary fairy tales. It also extensively discusses the invisibility of chronic pain as well as the reluctance of people to believe women’s pain in general, while subverting all expectations about where the story is going. I’ll keep picking up anything this author writes.

Assembly by Natasha Brown (4 stars) – The writing in this novella is incredible, as is its characterization and discussions surrounding racism. It would have been a 5-star read for me had it not been for one aspect of the plot that I, as a health care provider, can’t get behind, even as a symbolic literary choice meant to emphasize the exhaustion the main character is facing from systemic racism.

All of Us Villains by Amanda Foody and Christine Lynn Herman (4 stars) – This YA fantasy was a surprise hit for me! I haven’t seen many reviews, let alone many positive ones, but I’m here to tell you that this book is dark and underrated fun. The town of Ilvernath hosts a secret, deadly competition every twenty years between its powerful magical families, with the prize being control of a rare type of magic that’s disappeared from everywhere else. This year, however, the secret’s out–an anonymous author has released a tell-all depicting the entire blood-soaked history of the town’s tournament, which involves a teenage representative of each magical family battling each other with spellwork until there’s only one champion left standing. So now journalists and paparazzi have flooded Ilvernath, lending even more pressure and weight to this year’s contest and its unique champions. It’s told in four different perspectives, with great audio narration, and it’s a suspenseful ride full of magic, alliances, betrayal, and a potential enemies-to-lovers romance.

Our Favorite Songs by Anita Kelly (4 stars) – I continued to love Anita Kelly’s sweet, big-hearted, romantic writing with this second installment of their Moonlighters novella series, which is centered around a queer karaoke bar. This one is sort of an enemies-to-lovers story; the protagonists knew each other in high school but each had misinterpreted the other’s behavior, and when they meet again as adults they reconnect in a new way. I’m continually impressed with how fully Anita Kelly develops characters in such a short format, and makes their romances feel complete yet concise.

The Verifiers by Jane Pek (3.5 stars) – I’m very hit-or-miss with mysteries, rarely finding ones I vibe with, and although it did drag at times, I overall enjoyed modern-day techno-mystery The Verifiers. It’s set around the world of online dating, but my favorite aspect was its likable heroine, an avid mystery reader who jumps into investigating the death of a client at her company, and the dynamics surrounding her family.

Stuck With You by Ali Hazelwood (3.5 stars) – I felt similarly about this second book in Hazelwood’s Steminist novella trilogy compared to the previous installment, with the caveat that I think I enjoyed it slightly more? I’m beginning to notice repetitiveness in Hazelwood’s writing style and characterizations; I absolutely loved The Love Hypothesis, but I feel like the protagonists of its two follow-up novellas are essentially the same as in that novel. It was still a fun audiobook, but I’m lowering my expectations for the trilogy’s third installment and, unfortunately, her new novel that comes out this summer.

The Cult of We: WeWork, Adam Neumann, and the Great Startup Delusion by Eliot Brown and Maureen Farrell (3 stars) – After listening to the WeCrashed podcast and watching Hulu’s WeWork documentary, I still had questions and interest in the failure of this once-lauded startup company. Parts of this book were interesting, but parts dragged, and I felt like it focused overmuch on numbers rather than telling a story. However, I’m still interested in the story enough to watch the scripted WeCrashed show that’s coming out this month.

The Secret to Superhuman Strength by Alison Bechdel (3 stars) – I haven’t read a graphic novel in several years, and I picked this one up because Alison Bechdel was doing a speaking event in my city. Unfortunately, I missed her event, and also unfortunately, I wasn’t a huge fan of this memoir that used the author’s fitness journey to discuss her developing relationship with different philosophies. It didn’t work for me as well as her other graphic memoir Fun Home, feeling too didactic and self-aware for my personal taste.

Stone Heart by Katee Robert (3 stars) – I loved the first two books in Katee Robert’s Dark Olympus series, Neon Gods and Electric Idol, but unfortunately this prequel novella featuring an instalove romance between Medusa and Calypso lacked enough plot and character development for me to fully get on board. I’m still really looking forward to the next book in the series, Wicked Beauty, which I’ve preordered.

House of Sky and Breath by Sarah J. Maas (2 stars) – Coming from someone who really enjoyed House of Earth and Blood, this book is without a doubt my most disappointing read so far in 2022. Here is my succinct, fairly spoiler-free pro/con breakdown of why.

Pros:
-I like the worldbuilding and the wide variety of magical creatures
-A lot of the side characters are interesting/compelling

Cons:
-Please stop using the word alphahole
-I really really hate that our male lead is an ANGEL who wears a BACKWARDS BASEBALL CAP
-The plot in this one is really, really rough. It doesn’t make sense, it’s repetitive, and I don’t understand the point of the vast majority of it.
-I really don’t like the central romance
-It’s really not interesting when every single character is the most powerful person ever
-I liked Bryce so much less in this book
-The ending is truly terrible
-The most interesting (to me) characters are either dead or not really even in this book
-If so much of the plot hinges on Danika, she really shouldn’t have died so early in book 1, because it makes no sense that she hid everything about herself from someone she had such a deep bond with
-This book could have been better in SO MANY WAYS that reading it was incredibly frustrating.