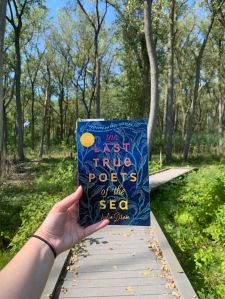 The Last True Poets of the Sea by Julia Drake

The Last True Poets of the Sea is a book that wasn’t even on my radar prior to Book Expo, when I heard it pitched in a YA Buzz books panel discussion as, I’m not kidding, a book that’s really hard to describe. Despite the vagueness of this description, or perhaps because of it, I was drawn to pick it up, even though when the panel had started I’d promised myself to only pick up one book that was being pitched, The Grace Year by Kim Liggett, because I wanted to limit the number of ARCs I picked up from BookExpo to ensure that I’d have time to read them all. I broke my promise to myself, which was pretty inevitable in hindsight, and I’m so glad I did, because The Last True Poets of the Sea is probably going to end up being my favorite YA book of the year.

It’s true that you could say The Last True Poets is hard to describe; you could also say that it’s a loose retelling of Shakespeare’s Twelfth Night as a YA contemporary, set in a small town in Maine, that focuses on mental health issues, sibling relationships, and family mythology. And yes, that is a lot of components for a premise, but it blends together perfectly through Julia Drake’s seemingly effortless writing style. We’re following fantastically flawed Violet (an incredibly dimensional, realistic main character), whose twin brother Sam has just survived a suicide attempt, and who’s been sent to live with her uncle in Maine for the summer while Sam receives treatment at a mental health facility, and where presumably she’ll be forced to stay out of trouble. Because while Sam has been struggling more and more with his mental health, Violet’s been partying more than she should, to the point where she doesn’t know how or where to draw the line. In Lyric, Maine, the small town where her family originates from and, legend has it, founded the town after her ancestor survived a shipwreck off the coast (one of the many Twelfth Night connections in this story), Violet gets a job at the local aquarium, falls in with an existing friend group, two of whose members, Orion and Liv, instantly appeal to her, and tries, sometimes successfully, sometimes not, to do better–as a daughter, a niece, a sister, a person. Her efforts are flawed and halting some of the time, but she’s trying, and as she does, she starts to investigate the mythology behind her family and the town of Lyric, and simultaneously starts falling for Liv, an unofficial Lyric history truther.

It’s so hard to review a book when your primary thoughts are I LOVE THIS BOOK SO MUCH, YOU ALL NEED TO READ IT, I PROMISE YOU WILL LOVE IT TOO. Because while that’s all true, I do need to also find other, more appealing ways to say it, so let’s try this: The Last True Poets of the Sea is one of the most authentic-feeling books I’ve ever read. It’s able to capture both the contradictions and complexities of being a teenager and also the atmospheric and unique Maine setting, seemingly without much effort, because Julia Drake’s writing is a style that almost seems simple until you realize just how skillful it is. It’s a beautiful book, but it doesn’t shy away from anything difficult or ugly, and it talks about mental health in ways that seem truer than most nonfiction I’ve read. It talks about love, not just first romantic love but sibling love and family bonds, and love for a place that’s wrapped in nostalgia and difficult to recapture as we get older. The characters are people that are so easy to identify with, because none of them are perfect, but messy in a way that’s somehow better. Reading this book made me feel and think about so many things; I was brought back to the three months I spent living in a small town in Maine during grad school, and also to the doubt and insecurities of being a teenager, and to the anxiety I deal with as an adult. The best books are like that, I think: consuming when you read them, and lingering long after you finish, to the point where you can’t help but keep thinking about them.

Hopefully somehow this messy, disjointed review somehow fits with this gorgeous book that’s impossible to simplify, and I hope that you all love it as much as I did.

I received an ARC of The Last True Poets of the Sea at BookExpo in exchange for an honest review.