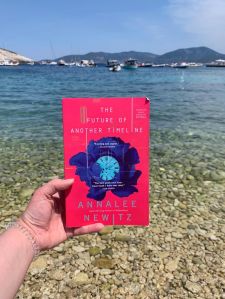 The Future of Another Timeline by Annalee Newitz

I have mixed feelings about time travel-focused science fiction; it’s never an element that draws me toward a story, but I’ve found it to be an interesting plot device in the hands of the right author (prior to picking up this book, namely Connie Willis, whose writing style I love). One of the things that can make or break a time travel plot is the method of time travel presented, and this was an element that I really enjoyed in The Future of Another Timeline: time travel is geology-based, and centers around specific rock formations in several locations around the world. We’re never sure whether the rock formations are a natural occurrence or whether they’re a remnant of a past advanced or alien civilization, but we know that one travels through time by tapping out specific patterns into the rock, and that humanity has barely scratched the surface of what the machines are truly capable of, and that explanation/non-explanation worked for me, because it felt unique, somewhat organic, and added a persistent oddness and potential for twists in the story.

The Future of Another Timeline follows time-traveling geologist Tess, who is ostensibly a researcher focusing on the late 1800s but in actuality is part of a secret organization dedicated to fighting for women’s and non-binary persons’ rights and preserving their contributions to society by manipulating the timeline and fighting against a shadow organization attempting to suppress women and non-binary persons in the past so that they can create a male-dominated future. We’re also following Beth, a teenager in the 1990s in California who is enmeshed in riot grrl culture and who’s dealing with a complex and precarious family situation, as well as the fact that she and her friends have just killed a rapist. We bounce back and forth between these two storylines throughout the book, with a few interludes from other perspectives, as Tess and her organization strategize about how to save the future while Beth deals with both emotional fallout and rising danger.

I found the writing style of Timeline to be concise, clear, and quick-moving; Newitz’s background as a science journalist feels clear in the story’s telling. It’s a fascinating premise, and one that could be intimidatingly complex if not told as succinctly as it was. The emotional depth of the story, however, was more inconsistent; I felt much more connected to Beth’s story than Tess’s, and not just because one involved time travel and one didn’t, but because Beth felt like a more fully realized character, whereas I never truly felt like I had a handle on who Tess was, beyond her fight for societal justice.

Beth’s portion of the plot, as well, was more gripping for me, probably because it was much more personal and immediate; it was as though, strangely, even though this is a book about time travel, it may have been a stronger story without the time travel element altogether, and just focusing solely on Beth. Newitz creates a fully realized vision of 1990s California, rife with punk rock, hypocrisy, the allure of freedom, and the crushing weight of restrictions placed on teenagers that prevent them from fully realizing that freedom as it lurks just out of reach with the escape of college. There were parts of Tess’s story that did work for me as well, particularly the parts featuring the other members of her society, the Daughters of Harriet (named for Harriet Tubman, who became a senator in this version of history), but for me the parts set in the 1890s tended to drag and felt oddly paced.

If you enjoy fast-paced, well-written science fiction that focuses on politically relevant issues, I do think you’ll enjoy this one. The Future of Another Timeline comes out tomorrow, September 24th.

Thank you so much to the publisher for the opportunity to pick up an ARC of The Future of Another Timeline at BookExpo.

One thought on “Book Review: The Future of Another Timeline by Annalee Newitz”