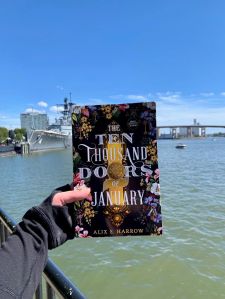 The Ten Thousand Doors of January had an intriguing premise and was solidly written, but unfortunately missed the mark for me. I do, however, think it’s a book that a lot of readers will love, particularly readers of historical fiction looking to dip a toe into the fantasy genre, or YA readers looking for an approachable crossover adult fantasy.

Ten Thousand Doors follows January Scaller, the ward of a wealthy New England businessman, Mr. Locke, whose father traverses the globe searching for other cultures’ treasures for Locke’s Archaeological Society to make their own. January is mixed race and has a hard time determining her place in the world; she lives in a sprawling mansion, but isn’t wealthy herself; she’s curious and intelligent, but her options as a woman in the early 1900s are limited;  and she’s often treated with confusion about her background or outright prejudice when she’s not under the eyes of the influential Mr. Locke. January’s worldview undergoes a dramatic shift when she discovers the existence of magical doors that can lead from our world to others, and later a mysterious book that elucidates some of the secrets of the doors, as well as some of the mysteries of her own past.

I loved the concept behind Ten Thousand Doors; portal fantasy is a subgenre I’ve been obsessed with from a very young age, and some of my absolute favorite books are portal fantasies (In Other Lands by Sarah Rees Brennan; The Magicians by Lev Grossman; Seanan McGuire’s Wayward Children series, etc). I was intrigued by the prospect of thousands of such doors and the different worlds to be encountered behind them, and I loved the discussion throughout the book about how the doors are bringers of change and societal upheaval, as they introduce new concepts and ideas into stagnant worlds. I loved as well how a certain door-related magic manifests later in the book (I don’t want to go into any more specifics to avoid spoilers). What I didn’t love was that we really didn’t get to see many of these worlds; we’re really only given glimpses into a few of them, and the most interesting one of those is only discussed secondhand, for a short period of time (albeit by an extremely badass side character, who I wish was the central character in this story). Ten Thousand Doors feels very much like a historical fiction book with just a hint of fantasy, and while that might appeal more to some readers, it wasn’t necessarily for me; I wanted more portal fantasy and less early 1900s.

I also overall wished for more character development and consistency over the course of the book. There were times when I really liked January and found her genuinely interesting and admirable, but I found her characterization to be uneven, and none of the side characters, allies or enemies, felt fleshed out enough to give the story emotional weight. Ten Thousand Doors has several characters who, on the surface, should be fascinating–a life-sucking vampiric being, a warrior-woman, travelers who hop from world to world–but as a reader, I never really got to connect enough with any of them since they were all filtered so heavily from January’s limited perspective on the situation. I also had a lot of difficulty due to the predictability of the plot; most of the twists were very much foreseeable, and one that wasn’t lacked the emotional weight I wished it had. The story is told from two perspectives and includes excerpts from the mysterious book that January finds, and at first I really liked the changing narratives and slow reveals, but since I was able to see what direction the plot was heading in fairly early on, this worked less and less for me as the book went on.

Although this wasn’t the book for me, I do think it’s a story that many readers will connect with and love. I received an ARC of The Ten Thousand Doors of January from the publisher at BookExpo.

One thought on “Book Review: The Ten Thousand Doors of January by Alix E. Harrow”