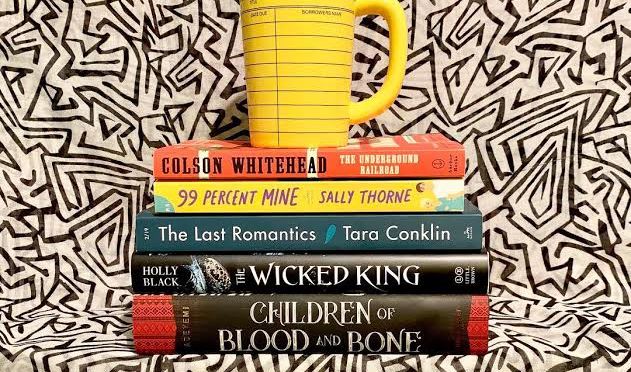 Despite the fact that I had a productive reading month in January, and it’s often hard for me to have two productive reading months in a row, I actually did a pretty decent job in February. I read one impactful and devastating 5-star read and several excellent/enjoyable 4-star books over the course of the month, and struck a good balance between reading physical and audiobooks. I also picked up books from a wide range of genres but managed three 2019 releases, in keeping with one of my main reading goals for the year. So even if February was a pretty cold and miserable month in terms of weather, it was still a great month for books.

The Underground Railroad by Colson Whitehead (5 stars) – With The Underground Railroad, Colson Whitehead wrote a book that everyone in America, and the world as a whole, should read. It’s impactful, devastating, and vitally important. The writing is intensely immersive and so skillful as to seem effortless, which underscores the emotional difficulty of reading a book like this. I can’t recommend it strongly enough.

Good and Mad: The Revolutionary Power of Women’s Anger by Rebecca Traister (4.25 stars) – I listened to the audio of this informative, infuriating book that discusses women’s anger in both a historical and contemporary context, and I thought it was fantastic. There are three books that I know of dealing with similar topics that were released around the same time (Eloquent Rage by Brittney Cooper, which I read last month; this book; and Rage Becomes Her by Soraya Chemaly), and I’m slowly making my way through all of them, as getting in touch with one’s anger is especially relevant given the current political situation. I thought that Traister did an excellent job of arguing the case for the importance and power of women’s anger and its crucial status in today’s world.

The Last Romantics by Tara Conklin (4 stars) – I really enjoyed this 2019 release that follows four siblings over a century. You can check out my full review here.

Unexpected Stories by Octavia Butler (4 stars) – Unexpected Stories was the sixth work I have read by Octavia Butler; she’s an author that I eventually want to read everything from. This particular ebook is comprised of a previously unpublished short story and novella that Butler wrote early on in her career, and although it wasn’t the strongest work that I’ve read from her, I still appreciated her skill and the emergence of the themes that haunt all of her works. The novella in particular was powerful and haunting, although it went in a direction I didn’t expect, one that was more optimistic than I had anticipated. It’s a very short book, just a quick snapshot of some of Butler’s early ideas, but it made me feel like I need to dive back into Butler’s longer work sooner rather than later. Her writing remains the one that tends to evoke the most emotional responses in me, and her use of science fiction to tell her stories somehow leaves them feeling more true than realistic fiction.

I was really intrigued by the world of the novella, “An Unnecessary Being,” which is set in a science fictional world where castes are determined by the amount of blue in one’s skin. The leaders of this world, the Hao, are revered for their strength as well as their completely blue status. That, and their rarity, also makes them a commodity and in many ways prisoners of the people who they lead. The story didn’t go the way I expected, but I thought the worldbuilding and sense of unease permeating the story were fantastic. The tone of most of the story reminded me a bit of “The Ones Who Walk Away from Omelas” by LeGuin. (The plots are very different, though.) I was less intrigued by the short story “Childfinder,” which I wish had been developed more, but I’m really glad I read this bind-up. Octavia Butler is an amazing writer and I know I’ll keep returning to her work throughout my life.

Children of Blood and Bone by Tomi Adeyemi (4 stars)  – This book was a fast, action-packed read with an important message. I got so absorbed in the story and literally could not stop reading it; I don’t remember the last time I read such a long book so quickly. I loved main characters Zelie, an indomitable and impulsive member of a persecuted group of people who have lost their magical abilities and have since faced discrimination and repression, and Amari, a runaway princess facing a cruel awakening to the real world, and felt very invested in their journey. I thought that the book tackled systemic racism and the pervasiveness of bigotry really well, and managed to strike a great balance between heavy topics and fast-paced action. I really wasn’t a fan of the romance, or the male main character, Inan, who changed sides and perspectives too many times, but those were my only real issues with the book. As soon as I finished it, I faced a sudden and intense need to read the sequel, which unfortunately won’t be out until June 4th.

99 Percent Mine by Sally Thorne (3.75 stars) – Along with seemingly everyone else on the bookish internet, I didn’t love this one as much as Thorne’s debut novel The Hating Game, but I did still really like it. In particular, I loved protagonist Darcy, a prickly, sassy photographer/bartender who refuses to let her heart condition dictate her life, and her determination to prove she’s capable of follow-through by sticking around to finish the flipping of her beloved deceased grandmother’s house. I didn’t find her love interest/twin brother’s best friend Tom to be quite as engaging, but it was definitely a cute, enjoyable contemporary romance, which is a difficult thing for me to find.

An Absolutely Remarkable Thing by Hank Green (3.5 stars) – I listened to this scifi debut on audiobook, and I thought it was a fun, engaging, fast-paced book to listen to; the narrator was great, and it’s a quick read. The protagonist, April May, becomes an unwitting social media celebrity after she discovers the presence of the “Carls,” giant statues that appear simultaneously in cities around the globe and have properties that mark them as something not of this world. As she gains more and more attention and followers, she becomes unmoored from her everyday life and her girlfriend, Maya, and discovers that being famous–and the Carls themselves–maybe aren’t what she predicted they would be. Although I did enjoy this book overall, I wouldn’t say that I thought this book had a ton of depth, and I wish the ending had more of a resolution and wasn’t such a clear setup for a sequel.

The Wicked King by Holly Black (3.25 stars) – I liked this book about the same that I liked The Cruel Prince, which is to say that I overall enjoyed the read, but had quite a few issues with the book overall. Slytherin/Machiavellian protagonist Jude frustrated me perhaps more in this book than she did in the last one, as despite the fact that some of her scheming was very skillful, she continued to make choices that were clearly the wrong ones. I do like the fact that she’s a YA protagonist who is very morally grey, but I think that her supposed skill levels have a lot of inconsistency and she can be a frustrating person to read about. The plot of this book meandered quite a bit, and I found some characters and circumstances a lot more interesting than others. I would have loved more time and emphasis, for example, on Jude’s fae sister Vivi and her human girlfriend, since I think that Vivi’s unconventional choice to live away from the fairy world deserves more exploration. I do plan to pick up the third book in what I assume is a trilogy, and I hope that things go in an interesting direction.

Five Feet Apart by Rachael Lippincott, Mikki Daughtry, and Tobias Iaconis (3 stars) – Some aspects of this contemporary YA romance about teens with CF worked better for me than others. I loved the female protagonist, a type-A teen with a popular YouTube channel, and I found her sections really informative and relatable, as an organization nerd myself. I also really appreciated how informative this book was in regard to CF, a disease I really didn’t have much familiarity with prior to reading this book. However, I wasn’t a fan of the male protagonist, who I felt was too much of a stereotypical YA love interest, and a few of the plot decisions toward the end were frustrating. I do think I’ll check out the movie at some point.

How did your reading go in February? Have you picked up any of these yet? Let me know!

One thought on “February Reading Wrap-Up”