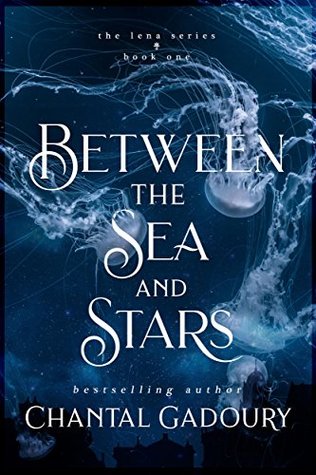 Book review: Between the Sea and Stars by Chantal Gadoury

Between the Sea and Stars is the story of a young merrow girl named Lena who lives with her father and brother beneath the sea, but dreams of exploring the surface. Unfortunately, it’s forbidden for merrows to explore the land or even emerge from the sea after the merrow queen was betrayed and killed by her human lover, who sought her magical shell that allowed her to transform from a merrow to a human. Through an unforeseen course of events, Lena does find herself on shore and immersed in the human world, although not in the way she had expected, and is forced to quickly adapt to a world of intriguing new friendships and enemies alike.

I’ve always loved mermaids and fairytale retellings, so I was of course drawn to this book due to its undersea setting and Little Mermaid inspiration. I really enjoyed learning about the world and culture of the merrow, and I thought that the Danish influences in the book’s language made it very unique. I thought that the story of the merrow queen, which may not have happened exactly the way Lena’s always heard it told, made an intriguing backdrop to Lena’s story, and it kept me curious about the assumptions that the humans and merrows make about each other’s worlds.

What didn’t work quite as well for me in this book was Lena’s character. It’s stated that she’s nineteen, but to me she seemed younger. She comes across as somewhat sheltered and naïve, which in some ways is very understandable considering her circumstances; after all, she has to adapt to living on land in a very short period of time, and she’s also dealing with the land and the sea both being very patriarchal in structure. However, I did find it frustrating that Lena rarely acts to assert or defend herself. To be fair, Lena has to deal with the aftermath of trauma over the course of this book, which absolutely affects her actions to a certain degree, but as a reader I couldn’t help but want her to stand up for herself. I also would have loved to have seen more female characters in general.

I did have some difficulty with the pacing of this book; it’s very short and moves quickly, but I felt like after the initial inciting events, there’s not much forward motion of the plot over the course of the book. I would have preferred that the book was longer so that we could see how the different tensions building in the novel would play out. There is so much interesting worldbuilding in this book that I would have loved to see more of both the human and merrow worlds, but I’ll have to wait for the next book. Overall, this was a fast, enjoyable YA novel rooted in fairy tales and mythology, and fans of mermaid stories will likely want to check this one out.

*I received an eARC of Between the Sea and Stars from the publisher in exchange for an honest review.

One thought on “Book Review: Between the Sea and Stars by Chantal Gadoury”