I participated in NaNoWriMo (for the first time!) this November, so I went into the month not expecting to get much reading done. I thought that setting aside time to write every day would cut into a lot of the time I normally spend reading, but I was really pleasantly surprised at how much I was able to read while getting a large chunk of writing done. Most excitingly, I read TWO five-star reads this month! I’m so picky that this is almost unheard-of for me, especially for a relatively lower-reading month. Don’t get me wrong, I’m impressed with how much I read this month, but it wasn’t quite as many books as I hit in a typical month. But TWO FIVE-STAR READS! Dang. I feel like a big part of the reason for that was that I didn’t set a big solid TBR for the month; I feel like maybe I read better books when I mood-read and don’t plan in advance. I’m going to be doing more of that going forward, although I did make a list of ten books I really want to get to this winter.

The Refrigerator Monologues by Catherynne M. Valente (5 stars) – This book could not be more incisive or more timely. I don’t understand why it’s not more popular. Essentially, this book takes on sexism in the world of superheroes, by highlighting women whose lives (and deaths) have been used solely as plot devices to motivate the male main characters. If, like me, you really enjoy superhero movies and are also a feminist, this book will resonate with you. You don’t have to have extensive comics knowledge to enjoy this book or to get most of the references (I certainly don’t); I’m not familiar with every character they referenced, but enough of it is mainstream, like riffs on Batman and Harley Quinn, that you’ll get it regardless. The book’s premise is that in the afterlife, here called Deadtown and expressed as this gorgeously banal yet macabre city, women who have been involved with superheroes gather as what they call the Hell Hath Club and tell their stories one by one. These stories are interspersed with life in Deadtown, which on its own would make a great book. I really wasn’t expecting to love this as much as I did. I both laughed and cried while reading this, and it’s very short. Highly, highly recommend. I need to read more from Valente, stat. 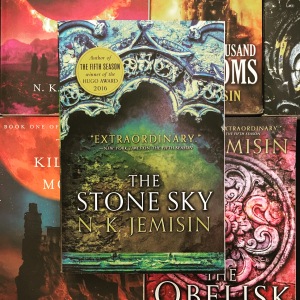 The Stone Sky by N.K. Jemisin (5 stars) – I definitely don’t want to give away anything about the plot of this book, since it would spoil the first two in the trilogy, but this was a very well-done and fitting end to the series. The world-building was incredible, and I was tearing up at the end.

Crosstalk by Connie Willis (4 stars) – this is a cute, funny, fast-paced, highly entertaining SF rom-com. It was a lot of fun to read; the dialogue is great, and you really end up loving the main characters. This was my third Connie Willis book, and my second of her “lighter” books; I have two others on my physical TBR shelf and a bunch more on my hypothetical one. 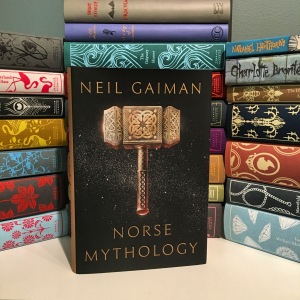 Norse Mythology by Neil Gaiman (4 stars) – I’ve always loved reading about mythology, although Greek mythology has always been my favorite, and this book was no exception. It was well-done and Gaiman also gave a great introduction talking about his connection to Norse myths. The parts about Ragnarok were particularly well-done.

The Awakened Kingdom by N.K. Jemisin (3 stars) – this novella takes place after the Inheritance trilogy, and the entire plot is a huge spoiler. It was cute and fun to read, but it wasn’t as awesome as most of Jemisin’s work tends to be.

And here are the books I acquired in November: