Before I get into everything, here are my reading stats for August:

Overall,  unfortunately, August turned into a disappointing reading month for me. I didn’t see it coming, especially since July was a FANTASTIC reading month (not only did I read a lot of books, but I read a lot of books that I just enjoyed the heck out of). I was actually super excited for my reading in August, since it featured two readathons that I love taking part in: Bout of Books and Tome Topple. And I still had a good time participating in those readathons, but overall the books I chose this month were disappointments in various ways, and I struggled finding motivation to pick them up for that reason.

So here’s what I read in August:

Arcadia by Iain Pears (4.25 stars) – So, here’s the thing. When I decided to pick this book up for the Tome Topple readathon (and when I put it on my top 10 tbr list for 2017), I had this really solid conviction that it would end up being a 5-star read. It’s been highly recommended by several bookish people that I trust, and its premise sounded so fascinating–it’s essentially a genre mash-up compared to David Mitchell’s Cloud Atlas that is set in a dystopian future, an agrarian fantasy world, and 1960s England simultaneously. And it was still a very good book, and I enjoyed reading it. It just wasn’t amazing.

The plot was very fascinating and intricate, and I really enjoyed picking up the little pieces and hints throughout to figure out what the heck was actually going on. But. The characters were very surface-level, and I wasn’t getting the deeper themes and meanings that I’d need for a five-star read.

So do I recommend this book? Yes. If you enjoy both science fiction and fantasy and enjoy a good plot-driven novel, you will definitely like this book. 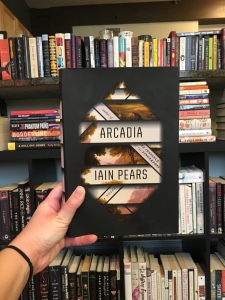 Wildfire by Ilona Andrews (4 stars) – I love everything Ilona Andrews writes, and this was no exception. This is the third book in a trilogy (although if it sells well enough, it’s possible the series may be expanded *crosses fingers*) about magical family dynasties in Houston. It’s more paranormal romance than urban fantasy, but there is still lots of action, humor, and worldbuilding, in classic Andrews fashion.

Heating & Cooling: 52 Micro-Memoirs by Beth Ann Fennelly (4 stars) – Before picking up Heating & Cooling, I had actually never heard of a micro-memoir before. I had, however, heard of microfiction, which I tend to absolutely love; there’s something about a short format that requires an author to pack so much meaning and complexity into every word. I think that shorter pieces are much harder to create than longer pieces for this reason; you just don’t have room for anything extraneous, and you have to make every bit count.

It turns out that I enjoyed the short memoir format just as much as I enjoy very short stories. Every piece in this collection–especially the extremely short ones–was impactful and concise; Fennelly’s writing style doesn’t waste a word. Fennelly writes about a variety of topics–her marriage, her parents, her children, the nature of memory, the less shiny aspects of her childhood and hometown–yet things never feel disjointed. In turns, I laughed out loud and felt profoundly disturbed by what she had to say, and I frequently re-read sentences to appreciate her skill in conveying things so concisely.

If you’re a short story or microfiction lover and are interested in picking up a memoir, this would be a great choice; I’d also recommend Heating & Cooling for anyone who enjoys memoirs and appreciates honest and well-crafted prose.

Binti: Home by Nnedi Okorafor (4 stars) – The sequel to Binti really built on the first book and also delved back into what wasn’t fully addressed in book 1–namely, Binti’s relationship with her family. Binti continues to unintentionally push cultural boundaries in a variety of ways, and this novella is building toward what I hope will be a really interesting conclusion.

Fierce Kingdom by Gin Phillips (3 stars) – So the premise of this book is undoubtedly intriguing–it’s a suspense novel that takes place over the course of three hours, following a woman and her four-year-old son as they attempt to survive and escape a shooter who is loose at the zoo. And for the first third or so of the book, I’d say it lived up to my expectations; it was extremely suspenseful and made you want to keep reading while still devoting time to characterization. The problems for me came later in the book; without giving anything away, I felt that not enough really happened over the course of the book. If you’re going to write a short novel, you really need to make every conflict and scene count, and I don’t feel like that’s what this book did. It was too much buildup for not enough payoff.

The Animators by Kayla Rae Whitaker (2.75 stars) – I liked the characters and the premise, but the plot was really all over the place and the pacing was super inconsistent. I didn’t love a lot of the decisions about how the story progressed. I did think it was pretty well-written and I especially liked the discussion of how animation and the creative process of the characters worked.

A Scot in the Dark by Sarah MacLean (2.25 stars) – The beginning of this book was so much fun, but things got SO repetitive after awhile, and the actions of the main male character were so idiotic and frustrating that I basically had to stop rooting for them as a couple.
I liked the concept a lot, but this book really needed more to happen plot-wise to justify the amount of complications to the romance.
I’d like to try another of Sarah MacLean’s books to see if things are handled better in others, because I feel like there’s much more potential than was utilized in this story.