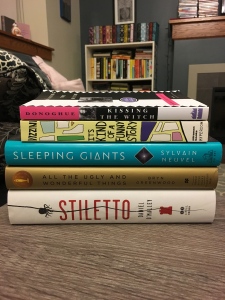 After a weird and lackluster reading month in January, I absolutely crushed it with #readmyowndamnbooks in February. I was able to pick up several books that I’ve been really looking forward to, and genuinely enjoyed all of the physical books I read this month. I didn’t stick to my TBR list very well, but then again, I never do.

✓ 22. Read a collection of stories by a woman. (From Celeste Ng, author Everything I Never Told You and the forthcoming Little Fires Everywhere)

When did I buy the #readmyowndamnbooks books I read? October (Sleeping Giants), December (Stiletto, Kissing the Witch), January (It’s Kind of a Funny Story, All the Ugly and Wonderful Things) (I decided I’m going to try and keep track of when I read the books I’ve bought so that I can get a better feel for how out of control my book buying has become)

So here’s what I read in February:

Sleeping Giants by Sylvain Neuvel (3.5 stars) – this 2016 new release was the first book I read in February, and it was the perfect way to kick off the month. It’s told in interviews and transcripts, so it’s a very quick read, and the plot is fast -paced as well. It deals with the discovery of alien artifacts on Earth and the scientists and government officials attempting to decipher them. I’m excited to pick up the sequel once I can get my hands on a physical copy.

Everything I Never Told You by Celeste Ng (2.5 stars) – I listened to this on audio, and unfortunately it was a disappointment for me, especially after hearing so much hype. The book started out strong and I thought the audio narrator did well, but I was really frustrated by the more cliched aspects of the story, and ultimately it was really anticlimactic.

It’s Kind of a Funny Story by Ned Vizzini (3.5 stars) – I did not expect to like this one as much as I did, especially considering that it was an impulse buy for $1 at my library’s book sale. This was a really insightful look into a depressed teenager; you couldn’t help but love and root for Craig though his struggles at an elite school and then in a hospital’s psychiatric ward, and by the end of the book I was crying.

The Bone Knife by Intisar Khanani (3.5 stars) – this was a free ebook I found awhile ago; it’s actually a prequel short story to an upcoming fantasy book series. Despite the fact that it was really short, it established a well-fleshed-out fantasy world fairly quickly, and I became attached to the characters despite spending only a short time with them. The premise involves a world where fae and humans interact, and humans with magical powers are coveted by the government. I’ll be looking for the first book in the series once it comes out.

Stiletto by Daniel O’Malley (4 stars) – This sequel to The Rook was a fun return to the world of the Checquy, an organization of supernatural secret agents. I thought that I’d be bothered by the fact that there were two new main characters, but it really didn’t affect my enjoyment of the book at all. I partly read this one and partly listened to the audio, which was performed really well. I’d definitely recommend this series to anyone who likes creative, fast-paced fantasy with some humor.

Kissing the Witch by Emma Donoghue (3.5 stars) – this was the short story collection that I chose to kick off my goal to read one collection per month, and although I did like it, it was a bit of a disappointment. It’s a collection of fairytale retellings that each blend into one another; a character from each story starts telling the subsequent story so that they all end up intertwined. This device makes it easy to read through in one sitting, and I loved the focus on female characters and female-female relationships. I just felt that the writing wasn’t quite as good as I was expecting, and I was hoping for deeper connections in some stories that never quite got there. I would recommend this, though, especially to anyone like me who loves fairytale retellings.

All the Ugly and Wonderful Things by Bryn Greenwood (4 stars) – this book was, I thought, well-written and also very disturbing. It’s about the relationship between a very young, abused girl and a man in his twenties, and it’s set in this sort of hellish environment of meth dealers and motorcycle gangs in the rural Midwest. It’s an unsettling story, and I thought it was told very well in multiple perspectives, but I didn’t find it to be absolutely amazing like some people apparently did (it was voted Book of the Year for the Book of the Month Club).

What did you all read during February? Let me know!