So, I had a rough month at work with lots of stress (fun times!) which, for me, translates into lots of book buying. Consequently, I am getting super excited about my fall and winter reading as my TBR shelf continues to shape up.

The Book of Strange New Things by Michel Faber – this is a literary scifi book (my favorite kind!) about a man who travels to a distance planet to act as a missionary, and is separated by galaxies from his wife, who is encountering all sorts of issues on Earth. I’ve seen some very positive and very negative reviews of this one; it wasn’t previously very high on my TBR list, but I saw it was on sale at Barnes & Noble and had to scoop it up. I know a lot of people also really loved Faber’s previous book The Crimson Petal and the White, but the synopsis of that one doesn’t grab me at all.

The Long Way to a Small, Angry Planet by Becky Chambers – I FINALLY got this book from Book Depository after ordering it over a month ago. It’s about a space voyage and focuses on a small crew and their interactions; it seems like it’s universally loved and I’m very excited for it. My favorite kind of science fiction is character-driven and/or focused on the sociology of alien peoples, so this should be right up my alley.

A Court of Thorns and Roses by Sarah J. Maas – I actually checked this out of the library twice to re-read it before ACOMAF came out, which was how I knew I should probably just go ahead and buy it. I’m not a fan of Feyre’s relationship with Tamlin, but I do enjoy aspects of this story and it’s one I’d definitely revisit in the future. I’d also like to own this entire series once the other books are released, so there’s that.

The Enchanted by Rene Denfeld – another book I’ve already read, this was a 5-star book for me a few years back. The writing is beautiful but discusses such horrific things; it’s a short book but done so, so well. The Enchanted focuses on death row inmates and an investigator working to gather information for the inmates’ defense; it’s brutal and real, but told in this sort of strange, detached way with fairy tale elements introduced throughout the book. If you haven’t read it already I highly recommend it.

Ignite Me by Tahereh Mafi – this is the last book in one of my absolute favorite YA series, and I’ve been wanting physical copies of these books for awhile. Now all I’m missing is the second book, Unravel Me; I’m just waiting for it to pop up on Book Outlet.

Speak by Louisa Hall – this was a total impulse purchase on Book Outlet, and it sounds fantastic. Seriously, here’s the synopsis from Goodreads: “A thoughtful, poignant novel that explores the creation of Artificial Intelligence — illuminating the very human need for communication, connection, and understanding. In a narrative that spans geography and time, from the Atlantic Ocean in the seventeenth century, to a correctional institute in Texas in the near future, and told from the perspectives of five very different characters, Speak considers what it means to be human, and what it means to be less than fully alive.” This one is moving to the top of my TBR list.

The Drowning Girl by Caitlin R. Kiernan – this is about a girl struggling with schizophrenia and attempting to determine what is real in her world as she starts to encounter elements of fantasy. This was nominated for a ton of awards in 2012 and won both the Bram Stoker Award and the James Tiptree Jr. Award.

Alias Hook by Lisa Jensen – reading Second Star by Alyssa Sheinmel last month (a YA retelling of Peter Pan set in Southern California) put me in the mood for more Peter Pan retellings. I prefer retellings where Peter is cast as the villain, as I’ve never liked him; he has always seemed very creepy to me. This is an adult version of the tale that focuses on Captain Hook as the protagonist, and how an adult woman appearing in Neverland throws a wrench into the story. 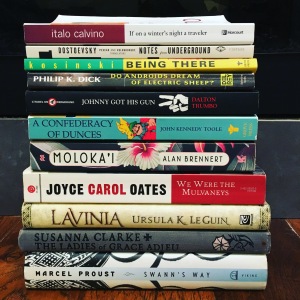 I also hit up a really great library book sale earlier this month and picked up 11 (!) books (at $1 each, this was definitely a steal). This particular book sale seemed to have a lot of classics/modern classics and not a ton of contemporary fiction that I was interested in. I seem to be having this problem lately where I really just have not been reading classics at all, despite continuously setting goals to do so; I read a ton of classics in my late teens but have tended to read more contemporary works in recent years. The problem is that I buy a ton of classics and they are sort of sitting on my shelf judging me. The reason I keep buying them is that I know I’ll get to them at some point in my life; I may drift in and out of classic-type moods through the years. Who knows!

Anyways, the book I’m most interested in from this haul is Italo Calvino’s If on a Winter’s Night a Traveler, which is written in an experimental format that seems to divide readers between love and hate. I also am interested to see if Susanna Clarke’s short story collection The Ladies of Grace Adieu is as wonderful as I found Jonathan Strange and Mr. Norrell.

There’ll be one more book haul post this month, as I am suffering from a severe BookOutlet addiction. Has anyone read any of these? Which should I pick up sooner rather than later?