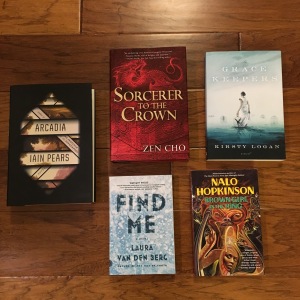 I may have hauled a lot of books in August; at the beginning of the months, I entertained hilarious thoughts of a book buying ban, which were quickly destroyed when a few coveted books became available on BookOutlet.com and several library book sales happened within a few weeks. Here are the books I bought during my Book Outlet binge:

Arcadia by Iain Pears – I saw this recommended on BookTube by Erica’s Epilogues and it sounded right up my alley; from what I understand, it’s an adult portal fantasy with several different worlds.

Sorcerer to the Crown by Zen Cho – this fantasy book has gotten awesome reviews and comparisons to Jonathan Strange and Mr. Norrell, which is one of my favorite books.

The Gracekeepers by Kirsty Logan – Goodreads calls this “a lyrical and moving debut in the tradition of Angela Carter and Margaret Atwood.” Um, yes please. In this world, people are divided between those who live at land and those who lives with see; this one was also recommended on Erica’s Epilogues.

Find Me by Laura van den Berg – this is a near-future science fiction read where an epidemic that causes memory loss and death spreads across the country; the main character is somehow immune and embarks on a journey across the country. I really don’t think I will ever get sick of this type of story.

Brown Girl in the Ring by Nalo Hopkinson – I’ve never read anything by Nalo Hopkinson, and how awesome does this Goodreads description sound: “The rich and privileged have fled the city, barricaded it behind roadblocks, and left it to crumble. The inner city has had to rediscover old ways-farming, barter, herb lore. But now the monied need a harvest of bodies, and so they prey upon the helpless of the streets. With nowhere to turn, a young woman must open herself to ancient truths, eternal powers, and the tragic mystery surrounding her mother and grandmother. She must bargain with gods, and give birth to new legends.”

Stay tuned for Part 2 of the book haul–library sales!