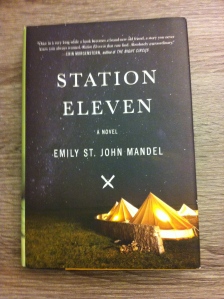 Emily St. John Mandel’s Station Eleven has generated a lot of buzz–not only because it’s well-written, which it is, or because it was nominated for the National Book Award (and the PEN/Faulkner Award, and the Arthur C. Clarke Award), but also because of its author’s take on its genre. Back in October, she ignited controversy by tweeting “I actually don’t think of Station Eleven as sci-fi, but am fully prepared to concede that I may be alone in this….”

In and of itself, it’s a fairly innocuous tweet. It’s an author talking about her own work, and expressing an opinion while acknowledging the opinions of others. She followed it up by telling the Washington Post, “My only objection to these categories is that when you have a book like mine that doesn’t fit neatly into any category, there’s a real risk that readers who only read ‘literary fiction’ won’t pick it up because they think they couldn’t possibly like sci-fi, while sci-fi readers will pick up the book based on the sci-fi categorization, and then be disappointed because the book isn’t sci-fi enough.”

My problem is this: when an author says that their work is “literary fiction,” what they really tend to mean is that it’s well-written. The idea that something can’t be science fiction because it’s “literary,” then, doesn’t make sense to me, because that would mean that science fiction itself is inherently not literary; that it occupies a rung below realistic fiction in terms of quality. And not only is that inaccurate, but it’s offensive to science fiction writers and readers alike. It minimizes the profound works of science fiction writers like Octavia Butler and Ursula LeGuin, and it alienates readers who are drawn towards science fiction concepts with complex characters and intricate plots. Lately, so many authors are working to push genre boundaries and create transcendent, well-written works that are unique in story and technique

This being said, I do think that Station Eleven would make a great unconventional beach read. The format of several intertwining stories keeps the action fresh if you’re reading for long periods of time–to summarize briefly, the story revolves around three main characters: Arthur, a Hollywood star who dies of a heart attack while performing King Lear on the eve of a flu pandemic; Jeevan, a paparazzi-turned-paramedic who attempts to resuscitate him; and Kirsten, a former child actress who grows up traveling with a Shakespeare company in post-flu America. There are sequences that take place before, during, and after the outbreak of the Georgia flu, which originates in Russia but soon spreads globally to decimate the global population and create a new world made up of small, isolated communities. The post-flu sections with Kirsten were some of my favorites: the writing is dreamlike and the terrain, and action, feels somewhat surreal. I also loved the plot thread describing where the novel’s title originates from: that of a graphic novel called Station Eleven depicting life on a planet-sized space station far from Earth. I found the reading experience to be itself both isolating and surreal, and in that way very, very beautiful. My only criticisms would be that I didn’t feel that Kirsten’s character was explored in the depth that it could have been, and I honestly think that the book could have been significantly longer and still retained its impact.